Bitcoin rallied on Monday, advancing past US$12,000 to its highest level in a more than a year amid a wider risk-on rally in equity markets.

The world’s largest cryptocurrency rose as much as 5.3 per cent to around US$12,473 in New York, the highest since July 2019. Crypto peers including Bitcoin Cash, Litecoin and Monero also gained, with the Bloomberg Galaxy Crypto Index rising to its highest since June 2019.

After trading sideways for much of the summer, Bitcoin has re-gained its mojo as a rally in the stock market nudges the S&P 500 to near a new all-time high. And in an environment of ultra-low rates, a number of analysts and crypto fans say Bitcoin -- along with other assets such as gold -- could potentially act as an inflation hedge, should prices start to rise.

“Inflation is currently low but real yields are across the board negative -- negative real yields and the monetary stimulus/spending has driven investors to seek out inflation hedges such as gold,” said Seamus Donoghue, vice president of sales and business development at METACO. “Given its limited supply and growing institutional acceptance, Bitcoin will also likely benefit from the market seeking inflation hedges.” 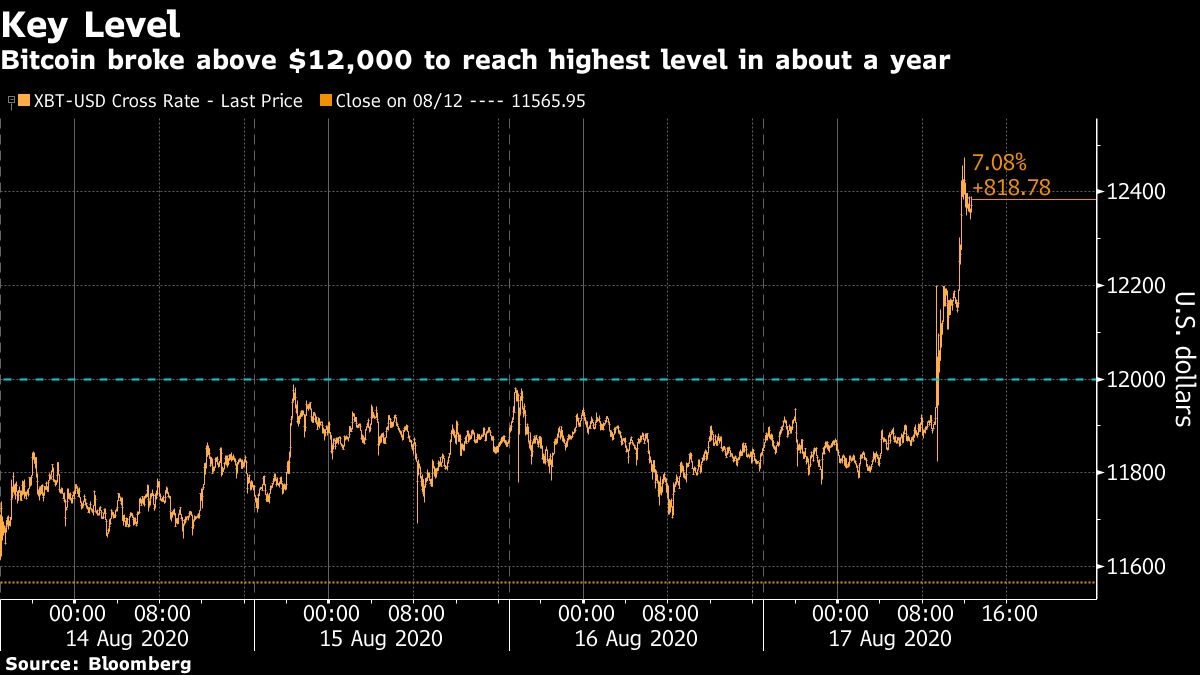 At the same time, some Wall Street veterans have taken a greater interest in the coin. Paul Tudor Jones made waves when he said he’s been buying Bitcoin amid central bank money-printing, while Michael Novogratz, founder of Galaxy Digital Holdings, told Bloomberg Television last week that about 25 per cent of his net worth is tied up in the cryptocurrency.

Bitcoin’s advance past US$12,000 makes it one of the best-performing asset classes this year. It’s gained about 70 per cent since the end of December and is up more than 100 per cent since mid-March, when it briefly traded below US$4,000. This year’s surge still leaves it about 40 per cent below the all-time-high of almost US$20,000 reached in December 2017

And technical indicators painted a positive outlook for the token: Bitcoin’s surge took it to the upper limits of its trading envelope indicator, a measure that smooths moving averages to map out higher and lower limits. While a breach of this level typically indicates a reversion to the mean -- and, therefore, a price decline -- technicals suggest this time might be different. Bitcoin, with a 14-day Relative Strength Index (RSI) reading of 69, isn’t overbought, signaling that further gains could be ahead.

“The best analogue for today is perhaps the Great Depression,” said Nicholas Pelecanos, head of trading at NEM. “From the conclusion of this crisis to the years that followed, the price of gold more than doubled, rising with inflation, and it is this macroeconomic backdrop that makes Bitcoin so appealing to investors.”