The digital age is finally coming to finance: Novogratz on Bitcoin rally and IPO

Bitcoin surpassed US$21,000 for the first time, another milestone in what’s been an eye-popping rally for the controversial digital asset this year.

The world’s largest cryptocurrency surged as much as 10 per cent to US$21,293 in New York on Wednesday, vindicating forecasts that were scoffed at months ago and leading to even higher prognostications. Bitcoin has almost tripled this year, with the rally accelerating Wednesday after breaching US$20,000 earlier for the first time.

“We have a new line in the sand and the focus shifts to the next round number of US$30,000,” said Antoni Trenchev, co-founder and managing partner of Nexo, a crypto lender. This “is the start of a new chapter for Bitcoin. It’s a narrative the media and retail crowd can properly latch onto because they’ve been noticeably absent from this rally.”

Bitcoin has surged despite a severe crash in March that saw it lose 25 per cent amid the coronavirus pandemic. Proponents have seized on the narrative that the coin could act as a store of wealth amid supposed rampant central-bank money printing, even as inflation remains mostly muted. 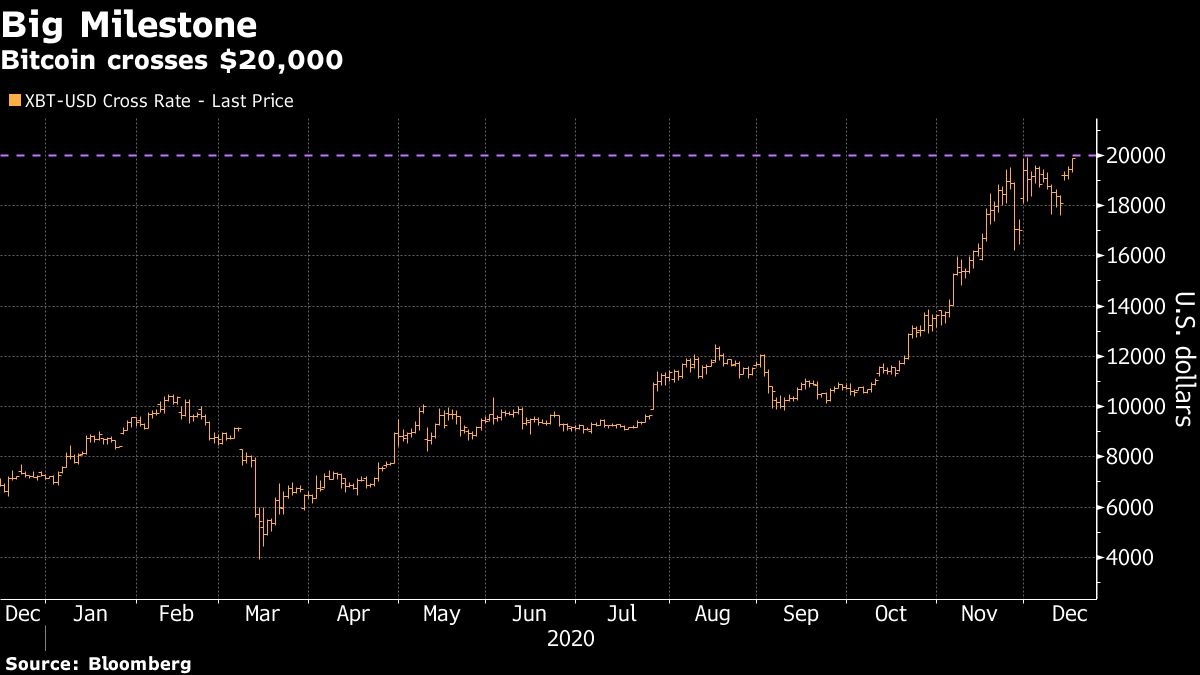 In addition, some Wall Street firms have taken a greater interest, with many seeking to capitalize on its gains in a world of rock-bottom interest rates. Guggenheim Partners LLC, for instance, recently said it might invest up to 10 per cent of its US$5.3 billion Macro Opportunities Fund in a Bitcoin trust.

Bitcoin’s cross above the US$20,000 and US$21,000 levels were its latest milestones in recent weeks -- the coin at the end of November reached a new high three years after setting a prior peak. It had traded at a few cents for several years after its late 2008 launch by an unknown software developer in the wake of the global financial crash.

“People tend to pile into momentum trades, so Bitcoin could have more upside from here,” said Ed Campbell, portfolio manager and managing director at QMA.

Peer coins also rose on Wednesday, with the Bloomberg Galaxy Crypto Index -- which tracks some of the major cryptocurrencies -- gaining as much as 7.2 per cent. Dash and Litecoin each advanced at least 6 per cent.

Ether, the second-largest digital asset, after Bitcoin, rose as much as 6.9 per cent, according to data compiled by Bloomberg, so much so that cryptocurrency exchange Coinbase said it was experiencing congestion issues and delays in sending the token. Customers logged complaints about the service on the Downdetector website, which tracks outages.

The rally follows an announcement by the CME Group Inc. that it has plans to expand its suite of cryptocurrency derivatives offerings to include Ether futures beginning in February.

“The biggest thing is the macroeconomic conditions -- this is the perfect setup for Bitcoin,” she said by phone. “From here things are going to move very quickly and I wouldn’t be surprised if we touched US$35,000 in the next three to six months.”

--With assistance from Claire Ballentine and Anne Cronin.