After a mad dash to a new high this week, Bitcoin is taking a break.

The digital asset’s advance was so strong, the coin entered into “overbought” territory, with its 14-day relative strength index (RSI) clocking in at 71 at one point Thursday. Assets are considered overbought if the RSI crosses above 70 and oversold if it falls below 30. The session saw it falling as much as 5.9 per cent to US$62,076, just a day after it reached nearly US$67,000 for the first time.

“Bullish sentiment among futures traders on Bitcoin reached 92 per cent this week,” said Matt Maley, chief market strategist for Miller Tabak + Co. “That’s very high, so it needs to take a breather to work off these short-term conditions,” he said referring to data from the Daily Sentiment Index.

Technicians are looking at other signals as well. Bitcoin broke through the upper band of the Trading Envelope indicator -- a technical measure built around moving price averages -- suggesting that it may have jumped too far, too fast. 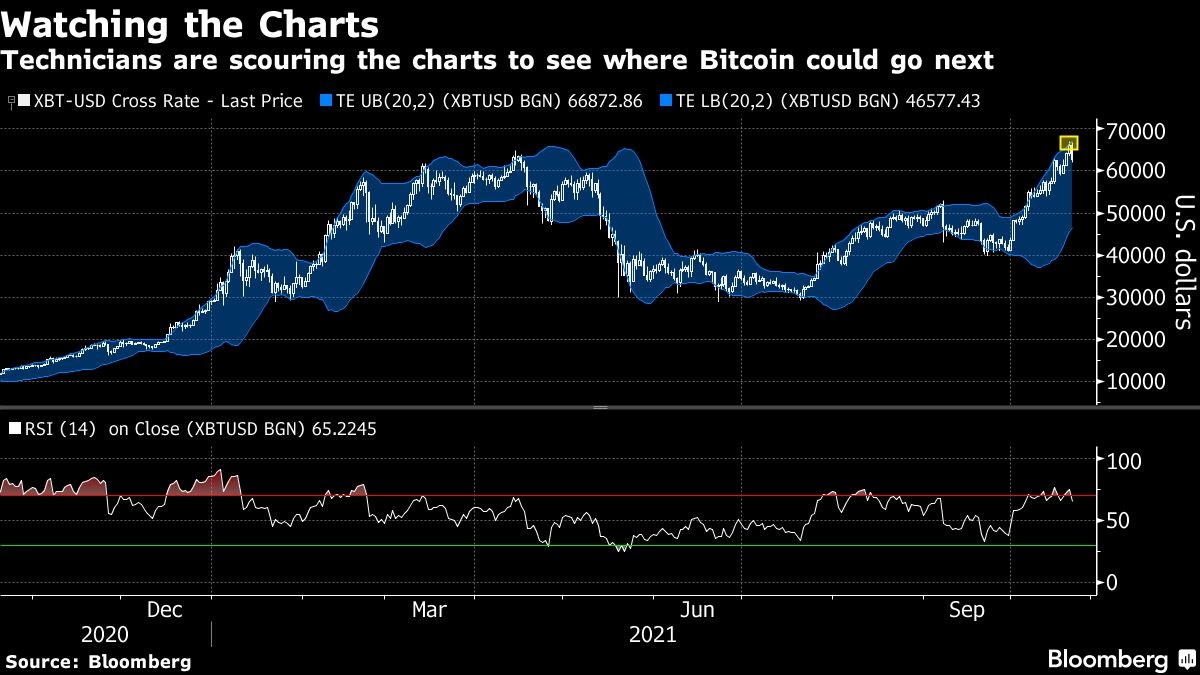 The largest digital currency touched a high of around US$66,900 Wednesday, galvanized by the successful launch of the first U.S. Bitcoin futures exchange-traded fund -- the second-busiest ETF debut on record and another step in its evolution. The cryptocurrency has rallied some 120 per cent in 2021.

The launch “solidifies crypto as an alternative asset class, it solidifies the case that cryptocurrencies are another investment product,” Chris Gaffney, president of world markets at TIAA Bank, said in a phone interview, though he added it can still be seen as a speculative investment.

Other digital assets also declined. Ether rose initially before also declining, losing as much as 2.2 per cent to trade around US$4,016. The Bloomberg Galaxy Crypto Index of some of the largest coins also fell.

Market-watchers have pointed out that Bitcoin tends to sell off following seminal moments in its history. Noelle Acheson, head of market insights at Genesis Global Trading Inc. noted that the coin declined after BTC futures were listed on the Chicago Mercantile Exchange, and repeated that pattern after Coinbase Global Inc. listed on Nasdaq earlier this year.

“This asset tends to peak around flashy events,” wrote Nicholas Colas, co-founder of DataTrek Research. “Our recommended approach is to scale in slowly, over a period of months or years, rather than chasing it when it becomes frothy,” he said, adding, “Be careful.”