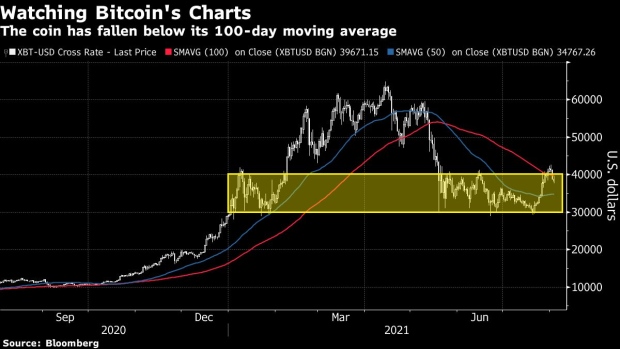 (Bloomberg) -- Coming off its best week in three months, Bitcoin is giving back some of its gains, with strategists flagging a drop below a key trendline that typically portends further weakness.

Bitcoin has faded from the recent highs it reached just last week, dropping roughly 6% since Friday. The decline has pushed it back below $40,000 and the coin is now trading within its January range at $38,209 as of 12:31 p.m. in New York.

“Bitcoin had become overbought this weekend, so it might just be working off that condition before it bounces back and takes out this weekend’s high,” said Matt Maley, chief market strategist for Miller Tabak + Co. “That would be very bullish. In other words, the action in Bitcoin over the next week or so will be very important.”

Some strategists say Bitcoin’s decline is just a regular pullback after it rallied strongly at the start of last week. Supportive comments from billionaire Elon Musk and Ark Investment Management LLC’s Cathie Wood, as well as speculation over Amazon.com Inc.’s possible involvement in the cryptocurrency sector had helped it rally.

“If it does indeed bounce back, it’s going to be quite bullish,” said Maley. “If, however, it sees much more downside follow-through, things are going to get scary pretty quickly.”

The Bloomberg Galaxy Crypto Index, which tracks some of the major cryptocurrencies, lost as much as 4.3% on Tuesday.

Cryptocurrencies have also become a focus for regulators in recent days -- a new push by Congress to require crypto brokers to report transactions to the Internal Revenue Service could create some unwelcome tax bills, Bloomberg News reported this week.

The new rules -- a part of the $550 billion bipartisan infrastructure package now being considered by Congress -- would also force businesses to disclose trades of digital assets of more than $10,000. It’s all meant to raise $28 billion. Still, fans of digital assets cheered the development, saying clearer rules from policy makers could potentially strengthen the industry in the long run.

While Bitcoin is extremely volatile and its percentage moves are outsized, it frequently forms identifiable technical patterns, said Frank Cappelleri, a desk strategist at Instinet. The coin’s huge move higher from 2020 through April 2021 was born from a multi-month bottoming formation and from then on, Bitcoin broke out, consolidated, formed fresh bullish patterns and made new highs until momentum finally dissipated.

“Whenever the next up leg commences, a similar chain of events may have to happen again,” he said. “And while the recent breakout attempt through $40,000 didn’t encourage upside follow-through, the consolidation since May has created a potential bottoming formation. That scenario will remain a possibility if Bitcoin can etch out a higher low versus its July low point.”