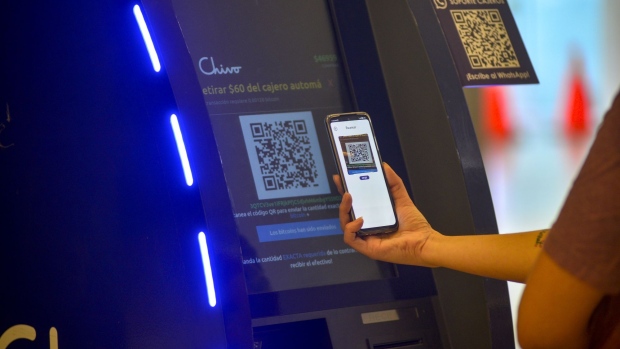 A customer uses a Chivo Bitcoin automated teller machine (ATM) at the Cascadas shopping mall in San Salvador, El Salvador, on Thursday, Sept. 9, 2021. After getting off to a rocky start because of technical glitches to the country's official digital wallet, El Salvadorian businesses have begun accepting Bitcoin payments, including multinationals like Starbucks and Pizza Hut. Photographer: Camilo Freedman/Bloomberg , Bloomberg

(Bloomberg) -- El Salvador’s Bitcoin trades are adding risk to a sovereign credit outlook that was already weak and reflecting a growing chance of default, according to Moody’s Investors Service.

Trading Bitcoin “is quite risky, particularly for a government that has been struggling with liquidity pressures in the past,” he said.

President Nayib Bukele has said he buys the cryptocurrency using his phone, though the government doesn’t publish data on its holdings. Bukele bought some coins ahead of El Salvador’s adoption of Bitcoin as legal tender in September, and sometimes took advantage of price drops to buy more in the following months, based on what he has said in posts on Twitter.

El Salvador’s current ownership of an estimated 1,391 Bitcoins isn’t large enough to pose a major threat to the government’s ability to meet its obligations, but the risk will increase if the government buys more of the cryptocurrency, Reusche said.

“If it gets much higher, then that represents an even greater risk to repayment capacity and the fiscal profile of the issuer.”

The high yields have cut off the government’s access to foreign bond markets, and the lack of a deal with the International Monetary Fund is adding to the country’s risk of defaulting, according to Moody’s.

The ratings agency downgraded El Salvador in July to Caa1, which reflects “very high credit risk”. Moody’s cited a “deterioration in the quality of policymaking” in their decision.

Slower growth in remittance flows and economic activity this year will hit government revenues, Reusche said, though a potential pension reform and a proposed blockchain bond issuance could provide some respite.

The Bukele administration has proposed a $1 billion, 10-year dollar denominated bond issued via Blockstream’s Bitcoin settlement system known as the Liquid Network, rather than though normal channels.

Selling “a decent amount of Bitcoin bonds could potentially help them with their liquidity pressures,” Reusche said. But “unless Bitcoin bonds are very well received and oversubscribed, we are seeing that the probability of the need to restructure their traditional market bonds is increasing.”