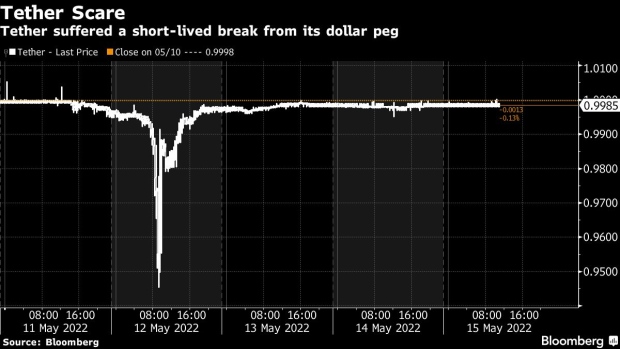 (Bloomberg) -- Bitcoin staged a modest recovery to trade just below $30,000, extending a period of relative market calm after the collapse of a closely watched stablecoin roiled digital assets in the past week.

The largest cryptocurrency advanced 1.1% to $29,670 at 10:40 a.m. in London. Ether, the second-biggest token, rose 1.9% while coins like Avalanche and Cardano posted larger gains.

Bitcoin dipped to a low of $25,425 on Thursday after the TerraUSD algorithmic stablecoin unraveled, throwing the entire ecoystem that supports it into disarray. At its height, the market panic engulfed the $76 billion stablecoin Tether, a key cog in cryptoassets that briefly dipped from its dollar peg.

“We have witnessed the rapid decline of a major project, which sent ripples across the industry, but also a new found resiliency in the market that did not exist during the last market downswing,” Changpeng Zhao, chief executive officer of crypto exchange Binance Holdings Ltd., tweeted on Sunday.

Even after Sunday’s recovery, the total market value of cryptocurrencies has dropped by about $350 billion in the past week to roughly $1.35 trillion, according to data from CoinGecko. Bitcoin is almost 60% off its November all-time high.

While crypto markets may have digested the worst of the TerraUSD fallout, the asset class faces other challenges -- most notably, rising global interest rates and tighter liquidity conditions. Federal Reserve Chair Jerome Powell this week reaffirmed that the central bank will likely raise interest rates by a half-point at its next two meetings.

“I remain long term bullish, especially on Bitcoin,” said Vasja Zupan, president of cryptocurrency exchange Matrix. “But I do foresee high volatility for some time followed by a period of much lower volumes at lower prices before we can expect trending to new all-time highs.”