Bitcoin slumped to a two-week low, with analysts pointing to a technical breakdown as well as the recovery of Colonial Pipeline Co.’s ransom as evidence that crypto isn’t beyond government control.

The largest token tumbled as much as 9.9 per cent to US$31,036, though it recouped some of those losses to trade around US$32,363 as of 2:31 p.m. in New York. The Bloomberg Galaxy Crypto Index fell as much as 15 per cent before also paring losses by mid-afternoon. Altcoins such as Ether, Litecoin and EOS also dropped.

“Bitcoin can’t get a break,” said Antoni Trenchev, managing partner and co-founder of Nexo, a crypto lender. “Big picture, what we’re experiencing here is a tedious, drawn out regulatory overhang which will continue to weigh on the Bitcoin price. Ultimately it’s good for the industry -- and crypto needs the right sort of regulation -- but for short-termists out there, it’s probably best to look away.”

The U.S. recovered almost all the Bitcoin ransom paid to the perpetrators of the cyber attack on Colonial last month in a sign that law enforcement is capable of pursuing online criminals even when they operate outside the nation’s borders. 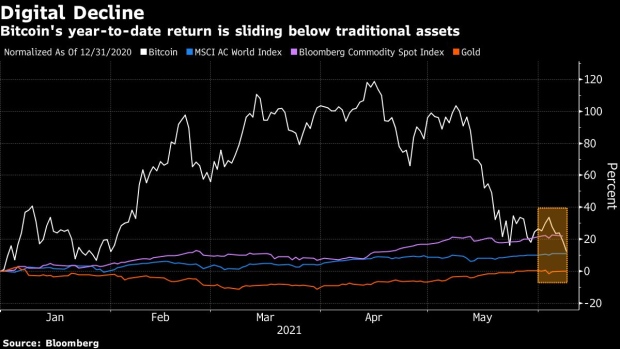 The FBI was able to find the Bitcoin by uncovering the digital addresses the hackers used to transfer the funds, according to an eight-page seizure warrant released by the Justice Department on Monday.

While the FBI’s ability to track and recoup the cryptocurrency may go against the anti-establishment ethos that led to the development of Bitcoin, it can also been seen as a positive sign for the sector as it seeks broader mainstream acceptance.

To Bloomberg Intelligence’s Mike McGlone, Tuesday’s decline is “linked to fears of the Feds seizing people’s Bitcoins,” he said. At the same time, “we’ve been in a down-phase for a month now and this is part of it. It’s a continuation of the latest downtrend and this is the latest spark. I thought Bitcoin would be up today on the Colonial news so I’m befuddled.”

One threshold is US$30,000, a level the coin briefly touched last month during a brutal selloff. But breaching that round-number level, could trigger another wave of selling given the lack of technical support between US$20,000 and US$30,000. On the other hand, Bitcoin’s relative strength index is signaling that the token is nearing the oversold level, indicating a possible reprieve. 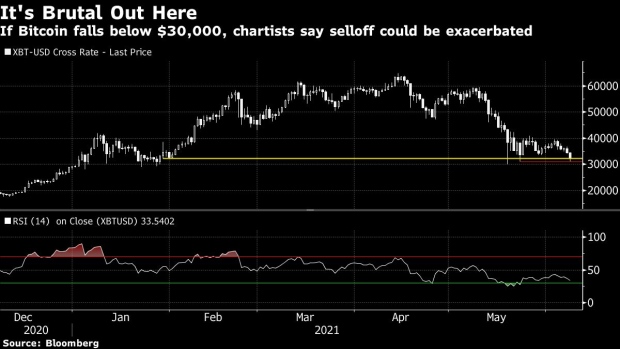 If the coin continues to decline and US$31,000 and US$30,000 are taken out, it could retrace its entire breakout from US$20,000 and fall back to that level, according to Tallbacken CEO Michael Purves. “This type of ‘round trip’ would not be unusual for an asset (or a stock) which put in an exponential rally,” he wrote in a note, adding that something similar happened after its 2017 rally.

Other market-watchers agree. “The major price support stands at the US$30K level, and a slide below this handle could run into stops and accelerate the sell-off in the short run,” said Ipek Ozkardeskaya, senior analyst at Swissquote.

Jeffrey Halley, a senior market analyst at Oanda, says that a break below US$30,000 could lead to “another capitulation.” Evercore ISI’s Rich Ross sees a test of support around US$29,000.

Bitcoin is still up about 12 per cent this year but the token has plunged from a peak of almost US$65,000 in mid-April, casting a pall over the cryptocurrency sector. The recent selloff was exacerbated by billionaire Elon Musk’s public rebuke of the amount of energy used by the servers underpinning the token. Harsh Chinese regulatory oversight also soured the mood.

“You had this phenomenon where Bitcoin got extended, but nothing goes up in a straight line,” said Dan Russo, portfolio manager at Potomac Fund Management. “That’s something to be expected -- you’ve seen throughout its short history these bouts of deep drawdowns. It just got extended to the upside and started to roll over.”

The virtual currency -- which has more than tripled over the past year -- is now in a “cooling off period” that could last “a few months” longer, said Vijay Ayyar, head of Asia-Pacific at crypto exchange Luno Pte.