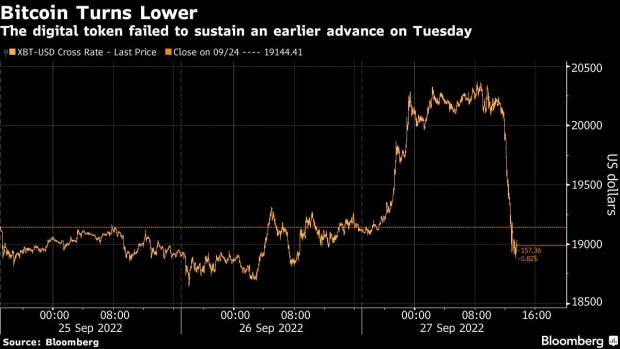 A Bitcoin token on top of U.S. dollars arranged in Montreal, Quebec, Canada, on Wednesday, March 2, 2022. Bitcoin was little changed after rallying more than 16% over the past two days as the possibility of expanding sanctions was raised to prevent Russians from using cryptocurrencies to circumvent restrictions. , Bloomberg

Stocks, bonds and commodities are swooning under a noxious mix of sharp interest-rate hikes, high inflation and a dim economic outlook. A dollar gauge is at a record amid demand for a haven from the maelstrom.

If there’s any consolation for crypto investors, it’s that other assets are breaching major markers whereas Bitcoin is still roughly 6% above June lows.

For instance, Asian stocks are at levels last seen during the pandemic’s onset, the US 10-year Treasury yield hit 4% for the first time since 2010 and the pound is around a record low against the greenback.

Conversely, if crypto takes out the June floor, that could sour sentiment not just for digital tokens but riskier investments more generally.

The MVIS CryptoCompare Digital Assets 100 Index has plunged 60% this year in a crypto rout that toppled brokers, lenders and a major hedge fund focused on the sector. Bitcoin has shed some $50,000 since its peak in November 2021.

Still, the fact the cryptocurrency is holding above its June low, despite the intense pressure on world markets, is leading to some speculation that its currently tight correlation with stocks could shift.

“Followers of the ecosystem have been excited to see correlations with risk-assets begin to break, meaning the ‘fast-money’ speculative crowd may be losing their influence on the space,” said Stephane Ouellette, chief executive of FRNT Financial Inc.