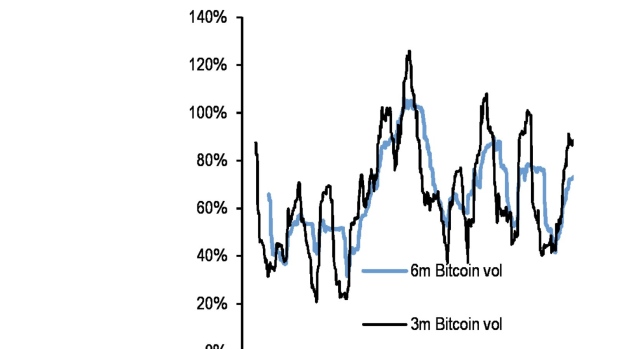 Mining rigs operate inside racks at the CryptoUniverse cryptocurrency mining farm in Nadvoitsy, Russia, on Thursday, March 18, 2021. The rise of Bitcoin and other cryptocurrencies has prompted the greatest push yet among central banks to develop their own digital currencies. Photographer: Andrey Rudakov/Bloomberg , Bloomberg

(Bloomberg) -- The recent pullback in Bitcoin’s volatility is setting the stage for a trend that could encourage institutions to dive in, according to JPMorgan Chase & Co.

Three-month realized volatility for the cryptocurrency has fallen to 86% after rising above 90% in February, they wrote. The six-month measure appears to be stabilizing at around 73%. As volatility subsides, a greater number of institutions could warm to the crypto space, the strategists said.

The coin’s volatility has kept institutions away, something that’s been a key consideration for risk management -- the higher the volatility of an asset, the higher the risk capital consumed by it, according to the strategists. None of the biggest U.S. banks right now provide direct access to Bitcoin and its counterparts.

Still, traditional Wall Street firms have been taking a greater interest in the coin, especially after it doubled this year on the heels of a 300% jump in 2020.

Goldman Sachs Group Inc. said this week it’s close to offering investment vehicles for Bitcoin and other digital assets to private wealth clients. Morgan Stanley plans to give rich clients access to three funds that will enable ownership of crypto and Bank of New York Mellon Corp. is developing a platform for traditional and digital assets.

Some of the attention on Bitcoin over the past two quarters has come at the expense of gold, JPMorgan’s strategists said, citing $7 billion of inflows into Bitcoin funds and $20 billion of outflows from exchange-traded funds tracking the precious metal.

Meanwhile, an additional boost to future adoption by institutions could arise from recent changes in Bitcoin’s correlation structure relative to other, traditional assets, according to JPMorgan strategists. These correlations have shifted lower in recent months, “making Bitcoin a more attractive option for multi-asset portfolios for diversification point of view and less vulnerable to any further appreciation in the dollar,” they wrote.