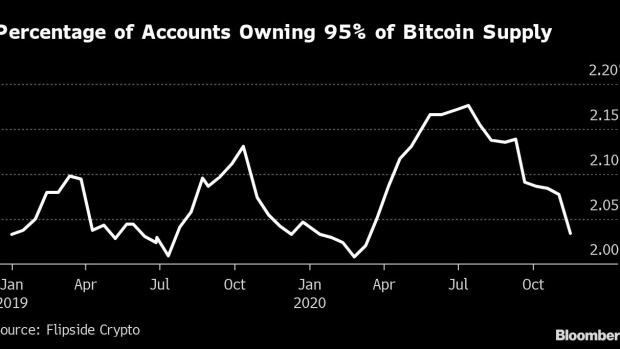 (Bloomberg) -- A lot of theories have emerged on why Bitcoin has skyrocketed almost 60% in the past month, with most heralding widespread adoption by institutions and individuals.The fact remains that there’s nothing widespread about Bitcoin ownership.

A few large holders commonly referred to as whales continue to own most Bitcoin. About 2% of the anonymous ownership accounts that can be tracked on the cryptocurrency’s blockchain control 95% of the digital asset, according to researcher Flipside Crypto.

“The story is that as the price has surged upwards lately, the concentration in the hands of the largest accounts has also risen” since July, said Eric Stone, head of data science at Flipside.

A large holder can have an outsized impact on the still highly illiquid market. One trade can often move the coin’s price significantly. That continues to leave small investors susceptible to wild price swings.

“While whales continue to be a significant force behind the overall BTC market, it is always challenging to ascribe a narrative to a particular price swing,” Stone said. “The most likely whale story today is that they’ll cautiously liquidate relatively small amounts of BTC over time, rather than risking a supply shock by liquidating larger chunks all at once.”

While retail investors may be tip-toeing back into Bitcoin, they typically cause few ripples. More than 70% of Bitcoin addresses have less than 0.01 Bitcoin in them, according to BitInfoCharts.

In the end, Bitcoin still appears to be the domain of the big fish.