A 31 per cent plunge in the morning. A 33 per cent surge in the afternoon.

Such was the wild ride Bitcoin took investors on Wednesday, lopping off billions in value before comments from some prominent proponents helped propel it on a torrid rebound.

The extreme price swings in an asset known for its turbulence caused outages on major crypto exchanges and dominated chatter on Wall Street. The tumult elicited a tweet from Elon Musk that implied Tesla Inc. wasn’t among the sellers, while Cathie Wood said her monitors flashed a “capitulation” that put the digital token “on sale.” Justin Sun, a tech entrepreneur who founded the cryptocurrency platform Tron, tweeted that he bought US$152 million in Bitcoin for around US$37,000 a coin.

“The history of these assets has been littered with aggressive rallies and sickening selloffs,” said Stephane Ouellette, chief executive and co-founder of FRNT Financial.

Rarely do they happen in a single session. The volatility dominated Wall Street on a day when stocks and commodities were also under pressure and the Federal Reserve was set to release minutes from its latest meeting. Frantic selling sparked outages on some of the biggest exchanges, from Coinbase Global Inc. to Binance. #Cryptotrading was trending on Twitter, where critics and fans alike were in a tither over the rout. 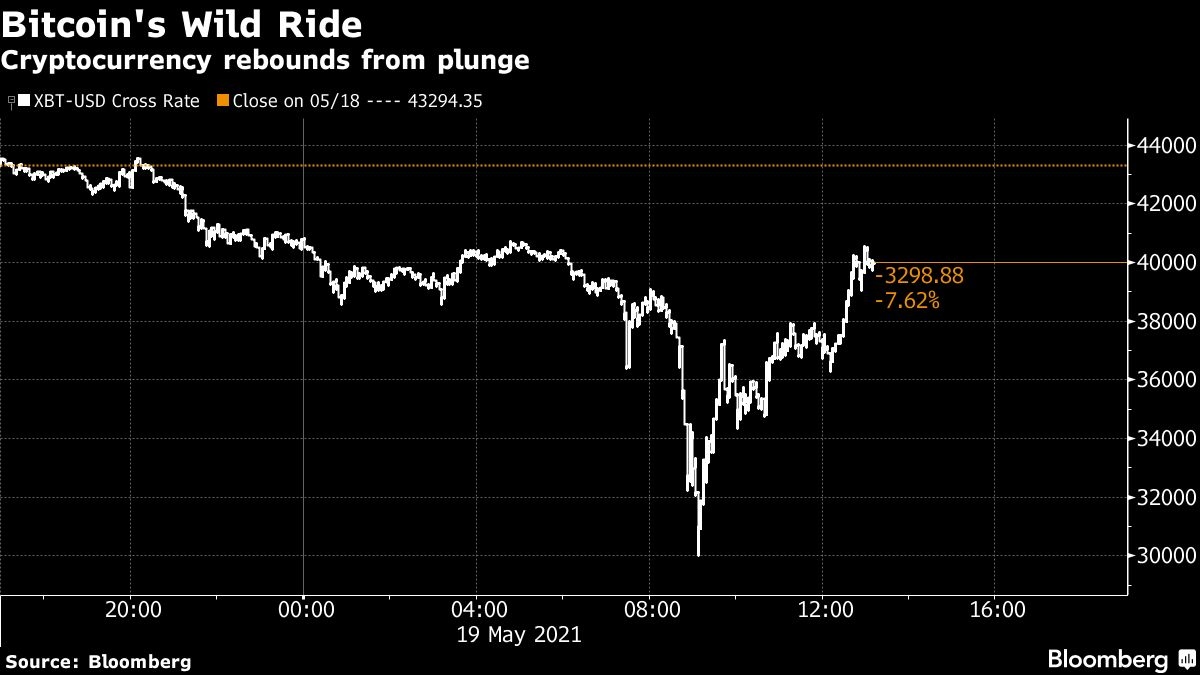 Tesla CEO Musk touched off the wild moves last week. Bitcoin plunged when he announced the carmaker wouldn’t take it as a payment, but then reversed when he said the company had no plans to sell its corporate crypto holdings. He seemed to imply in a tweet Wednesday that Tesla is not selling into the rout.

Volatility erupted in crypto-land last week when Musk retracted plans to accept Bitcoin for his company’s cars. Selling resumed over the weekend when the mercurial CEO seemed to suggest Tesla might want to sell its corporate holdings, but reversed after he tweeted that the carmaker had no plans to do so. A statement from the People’s Bank of China on Tuesday reiterating that digital tokens can’t be used as a form of payment added to the selloff.

While all were proximate causes for the rout, nothing could explain the frantic rout Wednesday morning, when the coin dropped thousands of dollars in price in a matter of minutes. Selling gave way to more selling as investors lured into crypto in search of a quick buck bolted for the exits. The selling accelerated when Bitcoin fell below its average price for the past 200 days.

Chart-watchers pointed to key technical indicators as the coin sold off. Bitcoin bounced off the US$30,000 level and many are waiting to see if it can break back above its 200-day moving average line. If it doesn’t, it could potentially retest Wednesday’s lows. 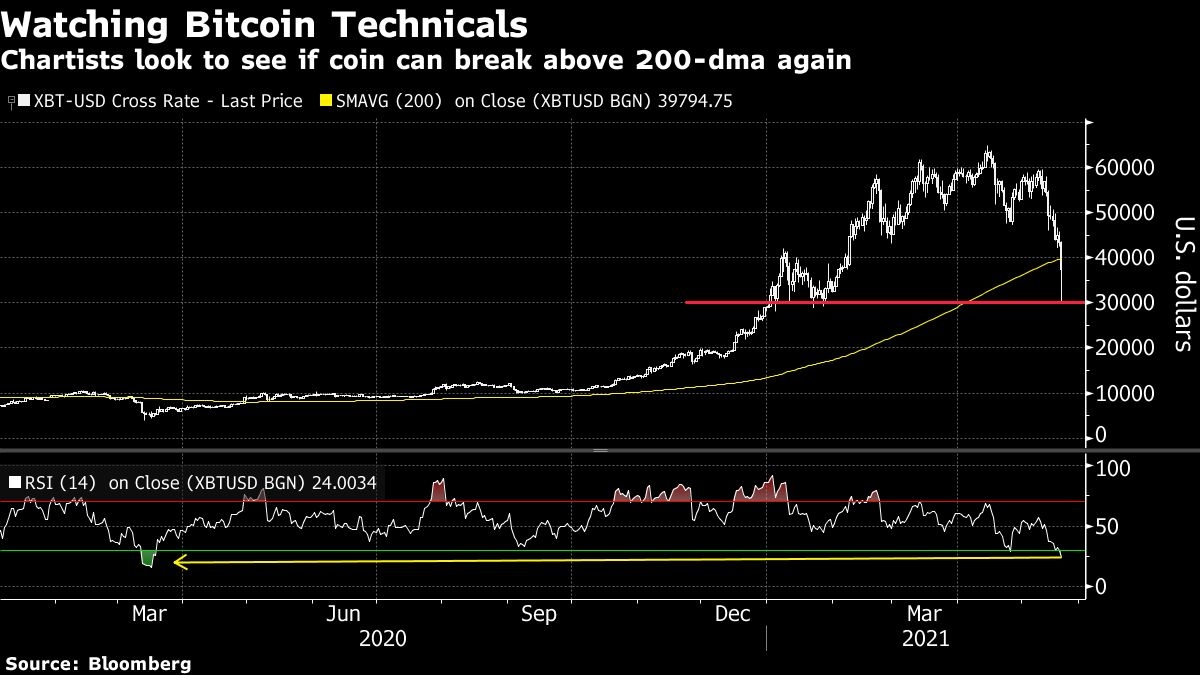 Cryptocurrency-linked stocks also dropped, with shares of Coinbase falling near 13 per cent at one point and Marathon Digital Holdings Inc. slumping as much as 16 per cent.

Bitcoin had embarked on a multi-month rally following Tesla’s February announcement, soaring to its US$64,870 peak, in large part due to the company’s embrace.

At the time, Tesla’s acceptance was hailed as a watershed moment for the coin, with many in the crypto world seeing it as yet another step in its evolution.

All that’s been wiped out following Musk’s head-spinning tweets.

“Realistically, it is not the first time Elon Musk’s tweets have been erratic and, frankly, wrong,” said Ulrik Lykke, executive director at crypto hedge fund ARK36. “The crypto markets are extremely emotionally driven and their participants are prone to overreacting to events they perceive as negative.”