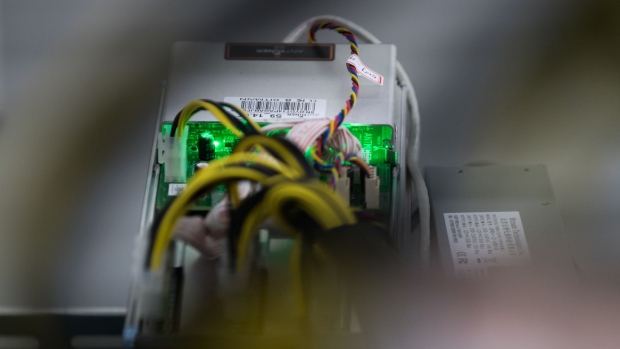 (Bloomberg) -- A Chinese chip designer who helped Bitmain Technologies Ltd. become the world’s largest maker of Bitcoin mining rigs before starting his own company has been arrested, according to three people familiar with the matter.

Yang Zuoxing, a tech mastermind with Bitmain until June 2016, was detained by police in Shenzhen at the end of October in relation to a legal dispute with his former employer, said the people, who asked not to be identified discussing legal matters.

Prosecutors in the city’s Nanshan district said in a Dec. 12 statement that Yang was arrested recently on suspicion of embezzlement, and that legal procedures were ongoing. The statement omitted the second of three Chinese characters that make up Yang’s full name, possibly to shield his identity. It didn’t mention Bitmain or MicroBT, the crypto-mining company Yang founded a month after quitting Bitmain.

MicroBT has grown into a serious contender, clawing market share away from Bitmain with its Whatsminer equipment. While crypto-miner makers produce machines with similar specs and prices, they compete against each other for tight chip supplies from foundries operated by Taiwan Semiconductor Manufacturing Co. and Samsung Electronics Co.

The arrest of Yang comes as competition between Bitmain and its rivals intensifies. While MicroBT’s flagship Whatsminer 20 series are the best-selling Bitcoin mining rigs so far this year, Yang’s absence has halted his company’s ability to make key decisions including on pricing, said two of the people.

Representatives of MicroBT and Bitmain declined to comment. The prosecutors’ office in Nanshan didn’t respond immediately to a request for comment.

An internal power struggle within Bitmain saw billionaire chief Wu Jihan kick co-founder Micree Zhan out of the company recently, and the company has been trying to tout new sales initiatives to lure new customers.

Yang told Bloomberg News previously that he helped Bitmain design its highly sought-after machines, but he left the company after Wu and Zhan turned down his request for a stake in the business. Yang, the majority shareholder of MicroBT, graduated from Beijing’s prestigious Tsinghua University with a PhD in mechatronics before entering the chip-design industry.

To contact the editors responsible for this story: Peter Elstrom at pelstrom@bloomberg.net, Colum Murphy, Vlad Savov