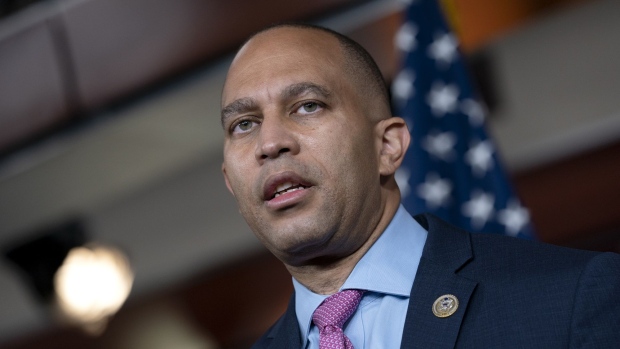 (Bloomberg) -- The New York district map drawn up by a special master would dilute Black and Hispanic voting power, and Democrats must focus on fixing its flaws rather than battling among themselves, House Democratic Caucus Chair Hakeem Jeffries said Wednesday.

Jeffries said the plan, which is set to be reviewed by a court Friday, “has degraded” black congressional representation in four New York City area districts, including his own in central Brooklyn, and Hispanic representation in another by moving neighborhoods into new or refashioned districts pitting Democrats against each other.

If the state court doesn’t readjust the map, Jeffries said, he expects there will be litigation.

In several cases, Democrats have been thrown into districts where they would face primaries against other incumbents.

In one case Sean Patrick Maloney, chair of the Democratic Congressional Campaign Committee, would be pitted against Mondaire Jones, a progressive first elected in 2020 from a district that spans Rockland and northern Westchester counties just north of New York City. His quick claim to that district has made the party’s midterm campaign leader a target of anger from some other House Democrats.

Jones’ residence, though, would be in a new NY-16 district represented by another Black progressive, Representative Jamaal Bowman. Jones said Tuesday that he’d wait until Friday to make a decision on where he’d run.

In another case, Representatives Carolyn Maloney and Jerrold Nadler, both of whom have been in Congress for 30 years and head influential House committees, would be competing for a Manhattan-based district.

“I’m confident we are going to work it all out to try to the best of our ability to avoid member-on-member primaries and give voters the opportunity to elect the candidate of their choice,” Jeffries said. “What I’ve been encouraging everyone to do is make sure the effort is focusing on the flaws” of the proposed map.