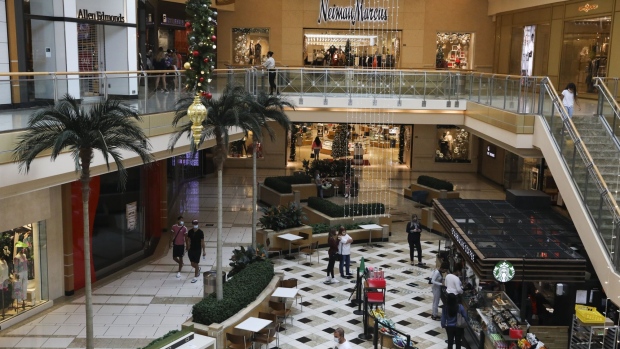 (Bloomberg) -- Black Friday -- once the ultimate U.S. shopping day -- is being disrupted like so much else in these Covid-19 times, with consumers largely avoiding malls and instead flocking online.

What that means for overall sales for the holiday season remains to be seen, but it’s becoming clearer that the pandemic has only accelerated the move away from big in-person shopping events that have defined American consumerism for the better part of a century.

After debuting and expanding online services during the pandemic -- from video chats to in-car order pickup -- retailers are now stress-testing how well the new options work in the busiest and most-crucial shopping part of the year. Brands also extended their promotions for a longer time this year, with many starting in October. If the industry can produce a solid fourth quarter during a recession and a pandemic, it’s hard to see it turning back to the old ways.

So far, the Black Friday weekend is starting out weaker than expected. Thanksgiving Day online spending came in nearly $1 billion lower than predicted in the U.S., according to Adobe Analytics. That backs up other evidence that Americans shopped for the holidays earlier than ever.

In-store visits also appeared lackluster. A decade ago, Black Friday was defined by long lines of shoppers waiting to get into malls and Walmart stores. That intensity has waned over the years, and it dwindled to a trickle in 2020. Many Americans remain wary of public places during the resurgent pandemic.

Inside Macy’s Inc.’s Manhattan flagship, it looked like a normal day, instead of what’s supposed to be the busiest shopping event of the year. In the past, the location featured a bonanza of patrons amid television news crews.

At Atlanta’s Atlantic Station, the scene was mixed. Around noon, the Dillard’s had only a handful of shoppers browsing aisles while groups of employees anxiously hovered nearby, ready to help. Meanwhile, the Bath & Body Works teemed with customers and the adjacent Victoria’s Secret had a line. Even struggling Banana Republic filled up. At Old Navy, an employee ran out the door to deliver an online order to a customer’s waiting car.

“Curbside pickup is going to stick for sure,” said Deloitte vice chairman Rod Sides. “It will continue to grow over time.”

The biggest buzz in many shopping centers came at GameStop, where customers lined up for a chance to buy a PlayStation 5 or the latest Xbox. The newly released video-game consoles have been hard to find.

But even these scenes reflect the broader shift to e-commerce. Scalpers using software, often called bots, sucked up online inventory and posted it for sale on the secondary market at twice the sticker price or more, according to reports. So camping out was the best chance for many.

At a quarter to midnight on Thanksgiving, Daniel Buffenbarger, a 32-year-old from Ludington, Michigan, tried his luck online. He failed three times on Walmart.com to get the new PlayStation, which he planned as a Christmas gift for himself. He also entered an online queue on the website for Meijer, a Midwest supermarket that also sells electronics. When he saw that 222,000 people were in front of him, he doubted his chances. But around 6 a.m., after staying up all night, his number came up, and he made the purchase.

“It was joyful,” said Buffenbarger, who works as a cook at a KFC and scheduled an in-store pickup for his PlayStation later Friday. “It made my exhaustion go away.”

Many retailers have deployed video chats and other one-on-one communication options during the pandemic, and shoppers continued to use them on Black Friday. At Chico’s FAS Inc., store employees are contacting clients virtually to show them new shoes and jackets, according to CEO Molly Langenstein.

“It’s another way of reaching out to customers, especially for the Black Friday weekend, and going for customers who aren’t comfortable to go into a store,” Langenstein said in an interview.

Ultimately, the benefits of shopping in-person remain a draw for some. At International Plaza and Bay Street mall in Tampa, Florida, Christine Able wanted to buy the only item she couldn’t find online: a gift for her son from Lululemon that had been out of stock on the website. With digital options failing her, she woke up early to stand in line before the store opened at 9 a.m.

Joe Cavaliere, who lives in Pensacola, Florida, was in the Tampa area for the holiday and shopped the Louis Vuitton store to get his wife a handbag that he couldn’t find at his local mall.

“I like the experience of coming into the store,” he said. “I don’t know what I will get when I buy something online. I like seeing exactly what I am buying.”