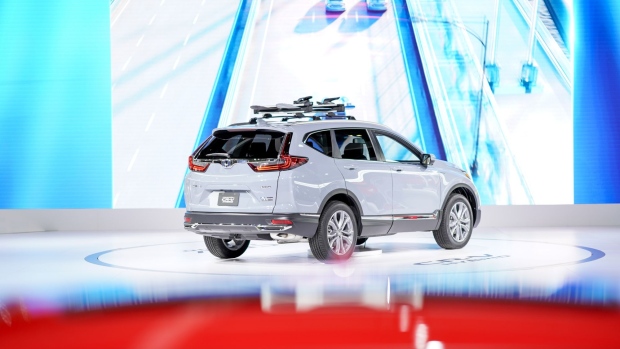 The 2020 Honda Motor Co. CR-V hybrid compact sports utility vehicle (SUV) is displayed at the AutoMobility LA ahead of the Los Angeles Auto Show in Los Angeles, California, U.S., on Thursday, Nov. 21, 2019. Engines are taking a back seat to motors at this years Los Angeles Auto Show as carmakers showcase the latest electric additions to their vehicle lineups. , Bloomberg

Total light-vehicle sales probably ran at an adjusted annualized rate of 17.5 million in November, a touch better than 17.4 million a year ago, according to a projection by LMC Automotive and J.D. Power. The market researchers expect industry deliveries to drop to 16.8 million in 2020, from about 17.1 million this year.

To move older model year vehicles from dealer lots, automakers boosted incentive spending by an estimated 12% to $4,538 per vehicle in November, J.D. Power estimated last week, exceeding $4,500 for the first time. Those discounts, plus the later date for this year’s Thanksgiving holiday, was expected to spur some of the best Black Friday deals in years, according to car-shopping researcher Edmunds.

Here are highlights from the automakers that are reporting results for last month:

The automaker’s top-seller, the CR-V crossover, had a record month, and deliveries of the smaller HR-V more than doubled. Sales of the Ridgeline pickup climbed 31%.

Toyota Motor Corp.’s U.S. deliveries jumped 9.2% to 207,857 vehicles, led by a 26% increase for its biggest-volume model, the RAV4 compact SUV. The Tacoma mid-size truck and Camry and Corolla sedans also had strong showings.

The Japanese automaker said nearly a quarter of its 44,665 RAV4 sales were gasoline-electric models. Sales of all Toyota- and Lexus-brand hybrids surged 65% to 27,274 vehicles -- about 13% of total U.S. deliveries.

SUVs including the compact Tuscon and mid-size Santa Fe and Palisade models led the way, but its hybrid and electric vehicles are also on the ascent, soaring 78% for the month.

To contact the reporter on this story: Chester Dawson in Southfield at cdawson54@bloomberg.net

To contact the editor responsible for this story: Craig Trudell at ctrudell1@bloomberg.net