The documents suggest that, in an apparent effort to conceal the black market cannabis seeds from regulatory inspections and other staff members, some CannTrust employees changed the names of as many as 20 strains to those which the company was licensed to sell in the legal medical and recreational markets.

Cannabis plants from at least two strains that originated from the black market-sourced seeds entered production rooms where they were fully grown to flower, packaged and sold into the recreational market, according to the sources.

In total, more than one thousand cannabis plants that originated from the illicit seeds were grown at CannTrust’s cultivation facility, the documents show. It is unknown how many of those plants were eventually processed for sale or destroyed, according to two of the sources.

Adding cannabis seeds obtained through the black market would have allowed CannTrust to significantly bolster its production at a time when it had overcommitted itself with supply contracts with provinces and other licensed marijuana producers, the sources said.

Three of the sources said that unauthorized activity ramped up shortly after CannTrust president Brad Rogers and its head of production, Michael Ravensdale, left the company last October.

CannTrust spokesperson Jane Shapiro told BNN Bloomberg in an emailed statement that “to the best of our knowledge, no product using seeds from unauthorized external sources was introduced into the market.”

Three sources who said they directly tended to the unauthorized cannabis said the operation was led by Brady Green, who recently left CannTrust after a five-year tenure that culminated as the company’s vice-president of cultivation. Green was hired by CannTrust in May 2014 as a grow technician and quickly rose through the ranks, holding several production roles including head grower and director of cultivation, according to a biography on the company’s website. CannTrust removed Green’s biography from its website Friday morning shortly after BNN Bloomberg published this story.

“[Green] has a passion for developing new cannabis strains, constantly improving growing methods and efficiencies, and passing his knowledge onto budding growers at the CannTrust Niagara Perpetual Harvest Facility,” CannTrust said on its website.

The team that Green allegedly tasked with handling the unauthorized cannabis was dubbed “The Brady Bunch” by other staff members, the three sources said.

“[Green’s team] didn't order [the seeds] through the normal chain of command,” alleged one of the sources directly familiar with the production of unauthorized cannabis.

“There is no way because it would take way too long if you wanted to do it right. I asked myself, 'We already have [the strain] Cannatonic. How come we have Cannatonic here and I have to take care of these [new] seedlings?’ I learned that they're under those names because those are the registered names that we have which we're allowed to grow, but they're really not those [strains].”

Green did not respond to BNN Bloomberg’s multiple requests to comment for this story.

Licensed cannabis producers grow their legal marijuana plants either straight from seeds obtained through Health Canada-authorized suppliers or cut “clones” from mother plants which are transferred to larger cultivation rooms in order to flower under optimal conditions.

Plants grown from two strains of CannTrust’s black market-sourced cannabis seeds – listed in internal company documents as “Citradelic Sunset” and “Code Black OG” before being re-labelled  – eventually entered into production rooms where they were packaged and sold into the recreational market, two of the sources with direct knowledge of CannTrust’s operations said.

“I can guarantee you they would harvest [plants that originated from black market seeds], trim them and send them out … Guaranteed, they went to the legal market. I can tell you 100 per cent they did,” one of the sources said.

Nick Lalonde, a former CannTrust employee who was responsible for disposing of cannabis at its Pelham facility and who previously blew the whistle on fake walls being installed to shield unlicensed production, told BNN Bloomberg he was instructed to deceptively label unauthorized product when he was cataloging waste material.

"No one [from Health Canada] had a clue about the seeds," Lalonde said in a recent phone interview.

None of the claims made by Lalonde or the sources who were granted anonymity by BNN Bloomberg have been tested or proven by a regulator or law enforcement.

The alleged strain-name subterfuge is the latest example of apparent wrongdoing at the beleaguered cannabis producer which has been beset by various forms of material suggesting the company's senior management approved plans that led to thousands of kilograms of cannabis being grown in unlicensed rooms. 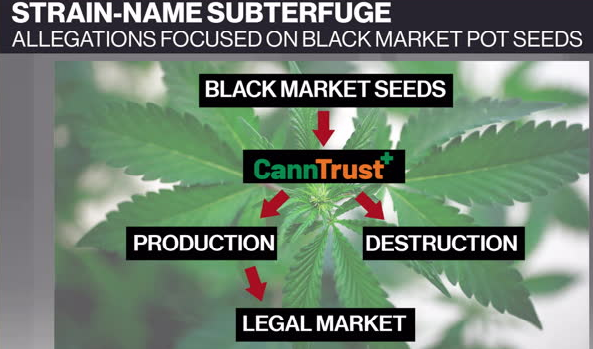 CannTrust later fired Aceto with cause and ousted co-founder Eric Paul from his role as chairman as the company awaits potential enforcement action by Health Canada as a result of non-compliance.

The federal regulator has a wide range of enforcement options it could choose to act upon, including a $1-million fine, a warning letter, and the suspension or revocation of CannTrust’s licence to grow and sell cannabis.

Health Canada spokesperson Tammy Jarbeau told BNN Bloomberg in an email that it is illegal for a licence holder to possess cannabis obtained in any way other than from another licensed producer, an authorized retailer or through an approved import permit. They can make a one-time application to introduce genetic material from the black market when applying for a new licence as long as it doesn't “represent an unacceptable risk to public health or safety.”

“If a licence holder is found to possess cannabis seeds or plants that were obtained in any other way, the Cannabis Act contains a number of enforcement tools that may be considered in determining the appropriate actions to prevent or address non-compliance, based on a review of the situation and all relevant information, including the health or safety risk and the compliance history of the individual or corporation,” Jarbeau said.

Jarbeau added that under the Cannabis Act, the penalty for illegal distribution or sale of cannabis can range from fines for small amounts to imprisonment for a term of up to 14 years. She declined to directly address the claims made by sources cited in this story.

In a subsequent email, another Health Canada spokesperson told BNN Bloomberg “Health Canada is currently reviewing all information provided by CannTrust and will determine any appropriate compliance and enforcement action needed.” 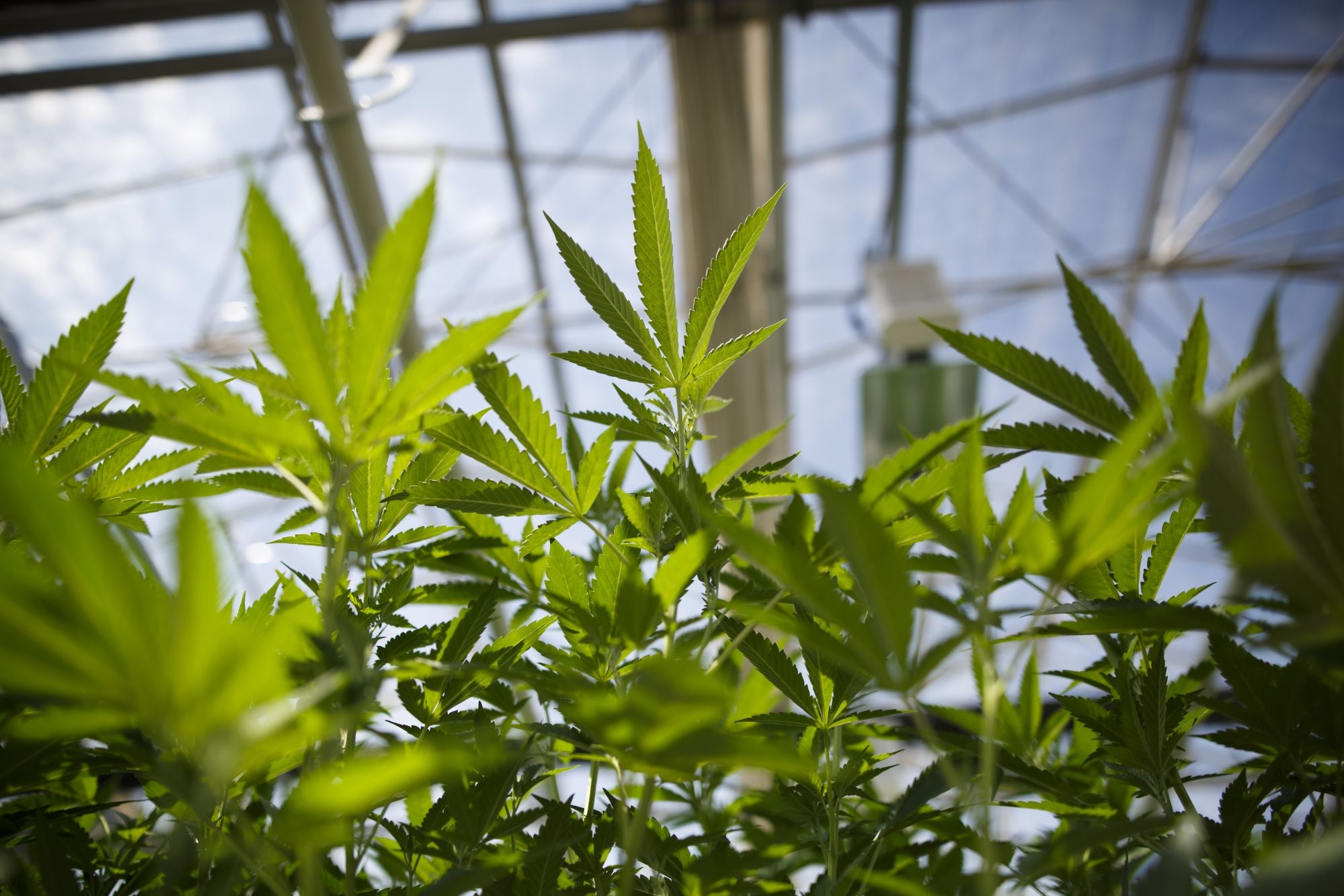 Are you confident in the quality of Canada’s legal recreational cannabis market?

CannTrust spokesperson Jane Shapiro told BNN Bloomberg the company’s management “is not aware of any inquiry to Health Canada for a one-time application to introduce genetic material from unauthorized external sources in licensing applications.”

Separately, CannTrust said in a release late Thursday that it laid off 180 staff members, mostly in cultivation and customer service roles. The cuts represent approximately 20 per cent of the company’s workforce and are expected to provide $9 million in annual cash savings, the company said. Shapiro told BNN Bloomberg none of the job cuts were with cause.

"We remain fully committed to building the organization we need for future success and rebuilding the trust of all of our stakeholders," said interim CannTrust CEO Robert Marcovitch in a statement.

The Canadian government legalized recreational cannabis in October 2018 as part of an effort to eliminate the black market from selling the drug. Despite legalization, the black market still accounts for roughly two-thirds of all cannabis sales in Canada, according to Statistics Canada, and its product has found ways of entering the legal market.

In February, Health Canada suspended the sales licence of Winnipeg-based Bonify Medical Cannabis after a third-party investigator determined the company's ex-management used an outside agent to procure illegal cannabis from the black market.

RavenQuest BioMed chief executive officer George Robinson, who was called in to tackle the problems at Bonify, told BNN Bloomberg in a phone interview that some cannabis producers may face pressure to tap the black market to acquire new strains in order to differentiate their products from competitors.

“If you’re going to compete with the black market, you’re going to need to compete with the black market genetics that get a lot of attention through cannabis competitions or magazine profiles in High Times,” said Robinson, who pointed out he never brought illicit material into a cannabis company he operates. “How do you differentiate yourself from a company if everyone is selling a ‘CBD Kush’?”

Robinson, who has no direct knowledge of CannTrust’s operations, added that if a cannabis company’s senior management opts to take a blind eye to regulators, “the rest of the company will likely follow suit.”