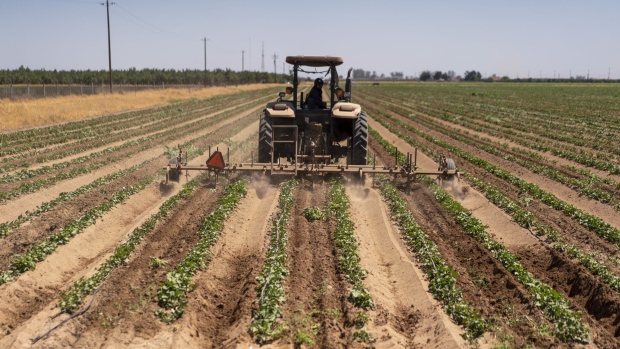 A farmer tills a potato field on dry grounds in Stevinson, California, U.S., on Monday, June 21, 2021. Almost three-fourths of the western U.S. is gripped by drought so severe that it’s off the charts of anything recorded in the 20-year history of the U.S. Drought Monitor. Photographer: Kyle Grillot/Bloomberg , Bloomberg

(Bloomberg) -- A group of Black U.S. farmers asked a judge to let them participate in a suit brought by White farmers challenging a racial equity program in the distribution of federal stimulus aid.

Black farmers whose livelihoods are at stake should be allowed to offer their unique perspectives and challenge the White farmers directly in the suit against the Department of Agriculture, the Federation of Southern Cooperatives/Land Assistance Fund said in filing Tuesday in federal court in Fort Worth, Texas.

The Agriculture Department probably can’t articulate “historical discrimination against minority farmers,” given that the agency itself was for decades a source of that bias, the group, which has 20,000 members, said in the filing.

White farmers sued in April, alleging a plan to earmark billions of dollars in aid for minority owned farms and ranches under the $1.9 trillion American Rescue Plan Act discriminates against “Irish, Italians, Germans, Jews and eastern Europeans.” The case was filed by a new legal nonprofit organization led by Stephen Miller, the conservative political operative who was a senior White House aide to former President Donald Trump.

“Although plaintiffs purport to advocate for equal protection under the law, they are trying to eradicate the government’s effort to correct a longstanding history of discrimination against Black farmers and other farmers of color,” the group said in the filing.