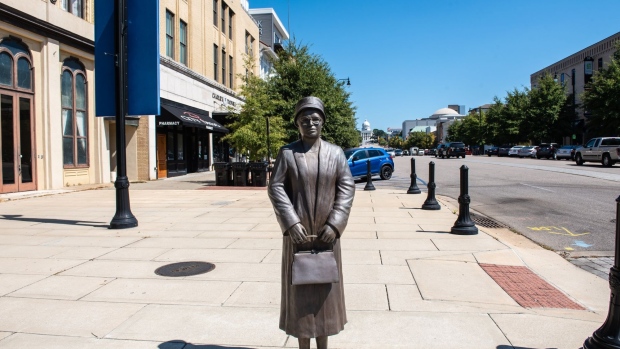 (Bloomberg) -- Once the heart of the Confederacy and the civil rights movement, Alabama is now in the middle of a new racial showdown: a US Supreme Court case that could make it harder for Black candidates to get elected to Congress.

As they open their new term next week, the justices will consider whether Alabama violated the Voting Rights Act by drawing its congressional map in a way that ensures the state will have just one Black representative for the next decade. The court may have tipped its hand in February when it temporarily blocked a ruling that would have required a second heavily Black district for the Nov. 8 election.

The case gives the court’s conservative majority a chance to transform redistricting rules and sharply curtail what critics call “racial gerrymandering.” At the same time, the clash risks exacerbating a sense among some minorities that their votes count for less than those of White people in a state that has seven congressional districts and is 27% Black.

“We’re asking for a piece of the pie, too,” said Khadidah Stone, a Montgomery resident and one of the voters challenging the GOP-drawn map. “Other communities have their districts. Why can’t we have ours as well? It’s already there. We have 27%. It’s enough for us to have another district.”

The case, which is being argued on Tuesday, is one of two redistricting disputes on the court’s 2022-23 agenda, along with a far-reaching North Carolina fight that will test the power of state courts to invalidate congressional maps as too partisan. They are the court’s first redistricting cases since the 2020 census forced states to redraw their lines -- an often contentious political process that has  reduced 22 majority-Black voting districts in the US to as few as nine.

The high court case could have broad ramifications, giving lawmakers far more leeway to draw maps without considering the impact on racial minorities. It's likely to affect pending litigation over congressional maps in Texas, Louisiana and Georgia, as well as similar fights over state and local voting lines.

The Alabama dispute joins an Oct. 31 college affirmative admissions showdown as major race cases in the first term for Justice Ketanji Brown Jackson, the first Black woman to serve on the court.

Alabama’s racial past forms an indelible part of its present. In the capital of Montgomery, the house where Jefferson Davis first lived after being sworn in as president of the Confederacy sits as a tourist site just blocks away from the Rosa Parks Museum, dedicated to the woman who famously refused to surrender her bus seat to a White passenger in 1955.

Forty miles away is the city of Selma, where a 1965 attack on civil rights marchers by state troopers spurred passage of the Voting Rights Act, the landmark law designed to protect minority voters at the polling place.

Alabama might have no majority-Black districts were it not for the Voting Rights Act. A court-ordered map led to Earl Hilliard’s 1992 election in the 7th District as the state’s first Black member of Congress since 1877.

The districts have remained largely the same since then, as has the delegation’s racial breakdown. Democratic Representative Terri Sewell now represents the 7th District, which covers parts of Montgomery and Birmingham, as well as much of the so-called Black Belt, the largely rural area originally named for the color of its fertile soil. The other six representatives are all White Republicans.

Sewell supports a second majority-Black district, even though doing so would probably add White voters to her district, which now has a 55% Black voting-age population.

“I don’t feel that most African Americans in Alabama feel disenfranchised,” said Representative Robert Aderholt, whose 4th District cuts across mostly rural areas in northern Alabama and has the fewest Black voters in the state. “I’ve got a very good relationship with the African American community, and they know my door is always open at any time. And quite honestly, I hear a lot of Whites that live in the 7th District feel that Terri Sewell listens to them.”

Although the legal issues focus on race, the partisan impact is inescapable. A second heavily Black district would probably give Alabama a second House Democrat.

A three-judge panel said Alabama was probably violating the Voting Rights Act with a map drawn by the GOP-controlled legislature.

Applying a multifactor test from a 1986 Supreme Court ruling, the panel said that Black voters “have less opportunity than other Alabamians to elect candidates of their choice to Congress.” The panel included two judges appointed by former President Donald Trump.

In his appeal, Alabama Attorney General Steve Marshall said the state based the new map on the previous district lines. Making a far-reaching argument that could strip the Voting Rights Act of much of its force in redistricting, he told the justices the measure can’t constitutionally require “racial preferences” when lawmakers are drawing maps.

Marshall, a Republican who declined to be interviewed in advance of the argument, contends that any effort to draw a second Black district would requiring linking voters in Mobile County, in the southwest corner of the state, with people on the eastern edge of the state, more than 250 miles (402 kilometers) away.

“The notion that somehow being fair requires drawing these bizarre shapes just to hit certain racial targets is what I think the Supreme Court’s going have a hard time with,” said Jason Torchinsky, who filed a brief for the National Republican Redistricting Trust.

But Evan Milligan, another plaintiff in the case, says putting predominantly Black communities in the same district makes sense given their shared history and policy interests. On a drive through the outskirts of his hometown of Montgomery, in a heavily Black neighborhood that lies in Republican Representative Barry Moore’s 2nd District, Milligan pointed out abandoned vehicles and ramshackle “shotgun” houses he said reminded him of rural Alabama.

“I could take you to Hale County, Perry County, Macon County, any of the rural Black Belt communities we would see things that are very similar, and the same in Mobile,” Milligan said. He cited diabetes, maternal mortality and entrepreneurial support as key issues for all those areas.

The challengers say they offered more geographically compact maps than the Republican-drawn lines, including configurations that bring the rest of Montgomery and the Black Belt into majority-Black districts.

The current lines now snake through Montgomery, carving up the majority-Black city so that two-thirds of it is represented by Moore, and split the Black Belt into four districts. The effect is to dilute Black voters’ strength, putting more than necessary to elect Sewell in the 7th District while ensuring Black candidates don’t have a chance in other districts, the challengers say.

Their arguments might have already succeeded were it not for one other piece of Alabama history: a 2013 Supreme Court ruling. Using an Alabama case, the court nullified Voting Rights Act provisions that required states with a deep history of discrimination to get preclearance by either the Justice Department or a federal court before issuing new maps or changing other voting rules.

The latest case is a “direct descendant” of the 2013 ruling, said Janai Nelson, president of the NAACP Legal Defense Fund, which represents Stone and Milligan.

“This is the first election cycle in which we no longer have the protection of preclearance,” Nelson said. “There’s no way that this plan with the disproportionate suppression of black political power that it has would have been able to survive preclearance.”