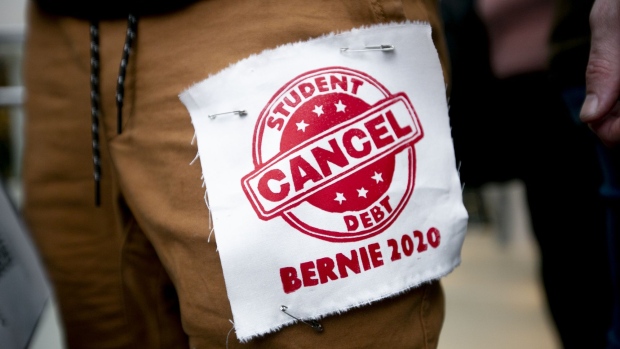 An attendee wears a patch that reads "Cancel Student Debt" ahead of a Get Out The Vote rally with Senator Bernie Sanders, an Independent from Vermont and 2020 presidential candidate, in Detroit, Michigan, U.S., on Friday, March 6, 2020. Sanders said his competitor, Joe Biden, could beat President Donald Trump in November, but added that he would be the stronger general-election candidate. Photographer: Anthony Lanzilote/Bloomberg , Bloomberg

(Bloomberg) -- The Biden administration’s plan to let a moratorium on student loan payments expire has renewed calls for the president to forgive student debt of up to $50,000 per person. If enacted, the move would help millions of Americans, particularly Black borrowers.

“It’s time for the administration to cancel $50,000 in student debt and give relief to people who are getting crushed,” Senator Elizabeth Warren, a Democrat from Massachusetts, tweeted on Monday. Representative Alexandria Ocasio-Cortez, a Democrat from New York, urged Biden to “lean on his executive authority” to ease student loans burdens for millions of Americans.

A June report from the Roosevelt Institute, a liberal think tank, found that erasing $50,000 in student loans per person would immediately increase Black wealth by 40%. The analysis found that Black borrowers in the bottom 10% of net worth would have around $5,000 more forgiven than their White counterparts.

Forgiving $50,000 in student loans “would provide more benefits to those with fewer economic resources and could play a critical role in addressing the racial wealth gap and building the Black middle class,” the Roosevelt Institute wrote in its brief. “The reason for this progressivity is simple: People from wealthy backgrounds (and their parents) rarely use student loans to pay for college.”

President Joe Biden campaigned on forgiving up to $10,000 in undergraduate loans per borrower. Under his plan, students who attended public colleges or historically Black private colleges would qualify for additional forgiveness if their families make less than $125,000. Earlier this year, Biden resisted calls from congressional Democrats to forgive $50,000, and has yet to enact his plan.

White House press secretary Jen Psaki said in a Dec. 14 briefing with reporters that Congress hasn't yet sent Biden a bill to forgive or cancel $10,000 in debt, but that “if Congress sends him a bill, he's happy to sign it. They haven't sent him a bill on that yet.”

According to the Education Data Initiative, 43.2 million Americans collectively hold $1.75 trillion in student loan debt, but Black students graduate with more debt and it takes them longer to pay it off, too. According to 2019 analysis from the Center for American Progress, 32% of Black students had already defaulted on their loans six years after beginning either a two-year or four-year college.

This is partly because Black people in the U.S. hold seven times less wealth, on average, than White people — making it harder for them to pay off their debts even when making middle-class incomes. Loan burdens are also holding Black people from building additional wealth through buying homes or starting businesses.