Walt Disney Co. releases its newest Marvel picture, “Black Widow,” in theaters and for purchase online Friday, and its performance will say a lot about prospects for the 70 or so films that studios put in storage during the pandemic, as well as the future of movie blockbusters.

Early international showings of “Black Widow” took in US$4.9 million, Disney said Thursday, scoring the biggest opening days in the U.K., France and the Netherlands since the onset of the pandemic.

The big-budget action film -- the first from the Marvel Cinematic Universe in two years -- stars Scarlett Johansson as the namesake superhero. She’s a Russia-born former KGB assassin and charter member of the Avengers who has helped carry the most lucrative box-office franchise in history.

Disney -- and Hollywood -- have a lot riding on pictures like this. The theater industry, struggling since the pandemic shuttered cinemas around the world, badly needs fans to return and feel safe. Movie studios, meanwhile, need to know how deeply an online-purchase option cuts into box-office receipts and if the revenue is enough to make such releases worthwhile.

Disney’s distribution strategy contrasts sharply with Universal Pictures’ handling of its big summer film, “F9: The Fast Saga.” On June 25, Comcast Corp.’s studio division made that picture available only in theaters, and it took in US$70 million domestically in its opening weekend -- a record during the pandemic. “Black Widow” is the perfect test of the streaming-and-cinema combo. It’s just the kind of effects-laden franchise film that would normally be a slam dunk for the business. 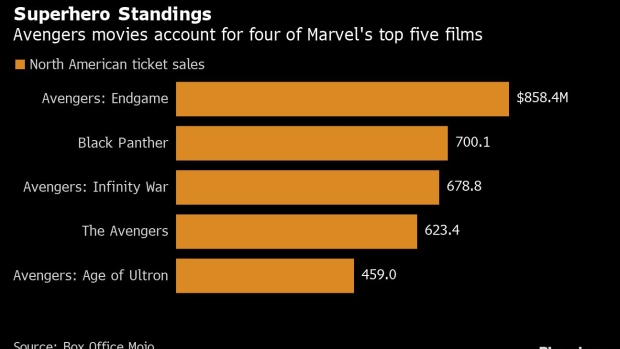 The picture failing to meet expectations would likely send shivers through the industry. Theaters would be inclined to blame the online release for stealing customers. The stewards of big studio budgets might face questions about whether uber-expensive action sagas built for the big screen are still worthy of so much investment.

“If ‘Black Widow’ beats ‘F9’ at the theatrical box office, Disney’s strategy will be vindicated,” said Joe Pichirallo, a film professor at New York University and a former studio executive. “If ‘Black Widow’ does less than ‘F9,’ then there will be those -- theater chains -- who will blame it on the simultaneous streaming.”

Right now it appears Johansson’s Natasha Romanoff character will outdraw Vin Diesel’s Fast and Furious crew. The Marvel film has scored 82 per cent approval among critics on Rotten Tomatoes, which aggregates reviews. The ticket-buying site Fandango said presales are the highest during the year so far.

An independent firm that studios use to estimate opening numbers has suggested “Black Widow” will take in US$80 million to US$90 million in North American sales in its first weekend. Disney executives said privately that they’d happy with anything over US$70 million. Boxoffice Pro, another estimator, puts the weekend gross as high as US$110 million. The movie cost about US$200 million to make, plus tens of millions more to market, and ticket revenue is split roughly 50-50 with theaters.

A US$70 million debut would rank “Black Widow” 20th among the Marvel openings and not even in the top 100 among all films, underscoring the challenge for Disney and theaters during the pandemic. Even with some films, such as “F9” and “Godzilla vs. Kong,” producing encouraging numbers, total U.S. ticket sales through last week were still down 38 per cent from a year earlier. And many theaters were closed for at least three of those months in 2020.

“Black Widow” will be available through the Disney+ streaming service for an additional charge of US$30. Disney has so far declined to share sales data for movies released in this format, or whether that’s more profitable than theatrical sales. The movie will be playing in about 4,100 locations domestically and most major markets internationally, excluding China.

“Black Widow” had a fight on her hands just to get here. The film was originally scheduled to be released in May of last year. Disney delayed it repeatedly before settling on the mid-2021 date. Some markets, including Australia and South Korea, are still struggling with COVID-19 outbreaks. The company is projecting US$50 million in international ticket revenue this weekend.

For fans of the Marvel films, it’s been a long wait. “Avengers: Endgame” made its debut more than two years ago and went on to collect almost US$2.8 billion in global ticket sales. Sony Pictures’ “Spider-Man: Far From Home” opened in July 2019 and took in US$1.13 billion. Since then the only new Marvel picture has been “The New Mutants,” a holdover from the 20th Century Fox studio that Disney released last year. It brought in a disappointing US$47 million worldwide.

Disney, meanwhile, is pulling out all the stops to promote “Black Widow,” including red-carpet premieres on three continents and short shows airing on Disney+ and ESPN+. Billboards feature Johansson in her striking white battle suit, while a video released this week includes Marvel President Kevin Feige teasing that some of the new actors in “Black Widow” will play roles for years to come in the Marvel universe.

NYU’s Pichirallo cautions that a “large segment of the public is still unwilling to go to theaters,” making it hard to decipher trends from the box-office sales of one or two movies and risky to predict what will come next.

“We’ll know more as the world returns to normal -- whenever that is,” Pichirallo said. “But there is no question that the film-distribution business has been significantly changed as a result of the pandemic.”