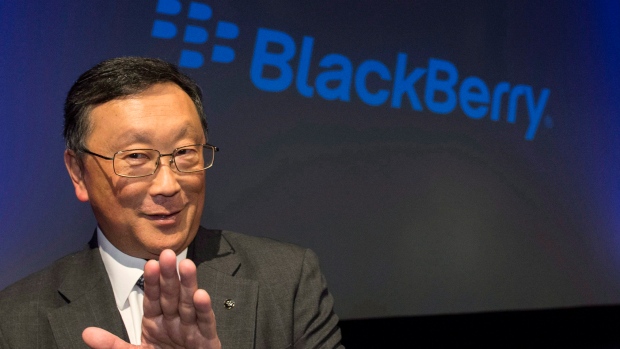 TORONTO – BlackBerry Ltd (BB.TO) Chief Executive John Chen said on Monday he was two-thirds of the way toward achieving his goal of turning the Waterloo, Ont. technology company's fortunes around.

"We have made investment over a billion-plus, all in software, all in security, and now we need to execute it," Chen said at an event in Toronto two days before the company will report its second-quarter earnings.

BlackBerry, a once-dominant smartphone maker, has shifted its focus to software that companies and governments use to manage their mobile devices.

Chen, who became CEO in 2013, had said he would decide by September on the fate of its unprofitable hardware unit. He did not provide an update when asked about the issue.

Chen also said he’s surprised at how the BlackBerry brand has lost Canadians’ support, given that it was “an iconic brand” representing “the history of tech and innovation in the country.”

“Yet, when I started this effort of rebuilding, I ran into all kinds of problems... I was surprised,” Chen said.

While Chen didn’t specify what kind of support BlackBerry needed, he urged that encouragement for the tech company would be a “win-win for all.”

“What I think Canadians ought to think about is, if you really think technology and knowledge is the next evolution of the economy, having a healthy BlackBerry is actually paramount in importance not only to Waterloo and other innovation centres, but also for the Canadian mindset,” Chen said.