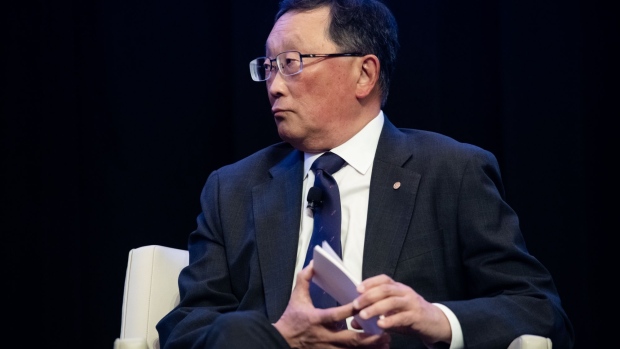 John Chen, chairman and chief executive officer of BlackBerry Ltd., speaks during a BlackBerry Cybersecurity event in New York, U.S., on Wednesday, Oct. 23, 2019. The event offers business leaders and technology professionals an opportunity to discover how BlackBerry and BlackBerry Cylance are enabling enterprises and government to become hyper-connected while protecting sensitive information and communications. , Bloomberg

(Bloomberg) -- A shareholder advisory firm urged BlackBerry Ltd. investors to vote against Prem Watsa as lead director, arguing that he should be held accountable for an executive compensation plan that isn’t in shareholders’ interests.

Glass Lewis & Co. said the company “has been deficient in aligning pay with performance for each of the last three fiscal years,” and that Watsa, who also has led the board’s compensation committee since late 2013, shouldn’t keep his role. Watsa is one of Canada’s best-known investors through his control of Fairfax Financial Holdings Ltd., which owns about 15% of BlackBerry on a fully diluted basis.

“We believe the concerns regarding the company’s pay practices and programs are severe enough to warrant withholding votes from the chair of the compensation committee at this time,” Glass Lewis said in its report.

BlackBerry paid its executives more than the median compensation for its peers, but performed significantly worse, the advisory firm said. Chief Executive Officer John Chen earned $3 million in salary and bonus for the fiscal year ended Feb. 28, 2021, but was granted a $106 million equity award in 2019, according to company filings. BlackBerry President Tom Eacobacci was given an $8 million equity award for fiscal 2021.

Glass Lewis’s recommendation is unlikely to cause much trouble for Watsa, who received the support of 90% of the shares voted at last year’s annual meeting. But it will serve to highlight governance concerns at a Canadian company that was once the toast of the mobile tech world for its smartphone innovations, collapsed, switched to a software-focused strategy and has now gained the attention of retail traders.

BlackBerry has more than doubled this year in U.S. trading, fueled by Reddit forums and social media channels where retail speculators seek out unloved or heavily-shorted stocks like GameStop Corp. and AMC Entertainment Holdings Inc., hoping to drive them up quickly.

Fairfax, as the largest BlackBerry investor, has benefited from that meme-stock mania, not only through its ownership of 8.2% of its existing shares but through holdings of convertible debt with a conversion price of $6 each. BlackBerry shares were trading at $13.69 Tuesday as of 11:24 a.m. in New York.

“We believe that Fairfax’s significant holdings of the company’s outstanding 1.75% debentures could, potentially, give Mr. Watsa a set of priorities that does not align directly with those of other shareholders,” Glass Lewis said.

Representatives for BlackBerry and Fairfax didn’t immediately respond to requests for comment.

Fairfax had organized a bid to take BlackBerry private in 2013 -- the same year the tech firm changed its name from Research In Motion Ltd. -- then abandoned it in favor of a bond deal and management shakeup that brought in Chen as CEO.