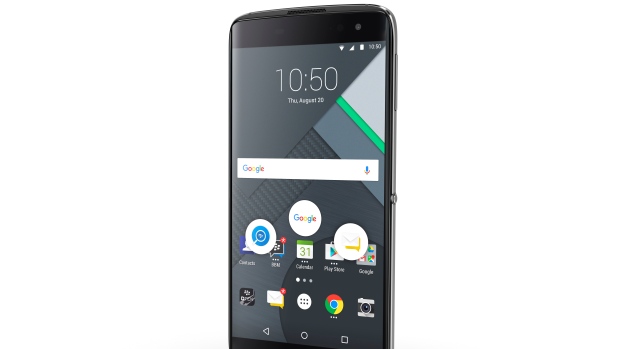 TORONTO -- BlackBerry released on Tuesday its second smartphone designed and built externally, the latest development in the company's push away from manufacturing handsets as it focuses more on its security software.

The DTEK60 may be the last phone distributed by the Waterloo, Ont.-based company as it moves to outsource hardware design, manufacturing and distribution.

TCL Corp. designed and manufactured the DTEK60, an Android-powered device that runs BlackBerry-developed software, though BlackBerry provided input in the design process.

The phone's launch comes three months after the release of its predecessor, the DTEK50, which was the result of BlackBerry's first such partnership with the Chinese firm.

The newer phone, which sells for $650, builds on the less-expensive DTEK50 that retails for $429.

It boasts a bigger screen, longer battery life, a camera with greater resolution and a fingerprint sensor. Like the DTEK50, it has no physical keyboard.

"This is ABSOLUTELY not the last BlackBerry phone," as we work with more partners - @MartyJBeard, at #DTEK60 launch #Android pic.twitter.com/nixRFw2fgW

Thurber wouldn't disclose how many DTEK60s BlackBerry is aiming to sell, but said CEO John Chen has been very clear with him "as to how much I need to sell this."

As for the DTEK50, Thurber declined to release how many have been sold since its release in July.

"I'm very happy with how it's selling," he said.

BlackBerry (BB.TO) announced late last month it was exiting the hardware business, a move some experts have urged the company to make as it repeatedly posted disappointing sales figures despite the much-hyped release of new phones such as the Priv late last year. Through licensing agreements, other companies will make, design and distribute BlackBerry-branded phones that will use its operating system.

When BlackBerry made its announcement, it also unveiled its first licensing agreement with a telecom joint venture in Indonesia, and Chen said other deals are in the works for China and India. Thurber declined to provide any update on further agreements.

The DTEK60 may be the last phone BlackBerry distributes, but Chen has said the company will have the option to distribute any phones made through these partnerships outside of the geographic boundaries of the deals.

There is also still the possibility of one last BlackBerry-designed phone -- with a physical keyboard -- appearing on store shelves.

Earlier this month, Thurber told BBC that that device would appear in stores within six months. Asked by The Canadian Press about that, a BlackBerry spokeswoman said the company was not commenting on future devices at this time.

Thurber said he doesn't view Google as a competitor.

"And we're comfortable that the phones we have and that we're bringing out have the features that our customer base is looking for and that they'll continue to be of interest."