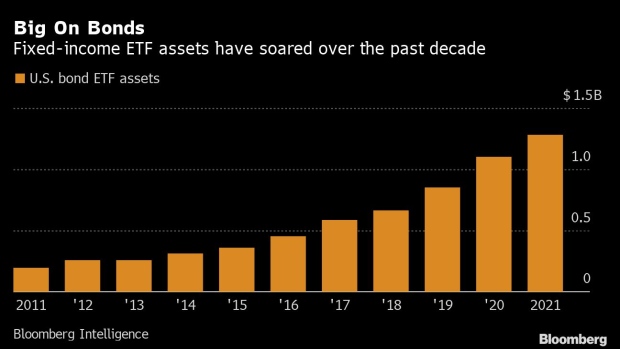 (Bloomberg) -- A group of ETF pros hailing from the likes of BlackRock Inc., State Street Corp. and JPMorgan Asset Management is stepping up efforts to disrupt the slow-moving world of junk debt -- even before their first-ever product hits the market.

That adds to seven U.S. junk funds the firm has in the works that will target specific industries including telecoms and energy.

It’s an ambitious bid by BondBloxx to harness the power of ETFs to bring the kind of precision enjoyed by equity investors to the underserved but diverse world of risky debt. The moves comes as the era of easy money fades -- testing the creditworthiness of firms across sectors and the liquidity of a market that lacks the depth of the ecosystem in stocks.

“This is a niche market at best,” said Ben Johnson, director of global ETF research at Morningstar Inc. “But that’s not to say that carving our a niche in a multi-trillion dollar market isn’t potentially lucrative.”

BondBloxx was formed last year by a group who held senior roles across many of the biggest issuers. It’s betting bond ETFs have emerged as a mainstream asset class that supports specialist strategies.

After surging in popularity in the wake of the Covid crash, assets in U.S. fixed-income ETFs have now roughly doubled since 2018 to around $1.3 trillion. However, they’re still dwarfed by the $5.6 trillion in stock ETFs, and only about $105 billion is invested in junk funds, according to Bloomberg Intelligence.

“Institutions and corporate bond desks that want to deal in baskets of bonds with these characteristics would be the most likely users of these funds,” Johnson said.

Family Management Corp.’s David Schawel isn’t so sure. Aside from short-term, opportunistic trades -- such as a sudden spread widening between the different rating tiers -- it’s unclear what the use-case would be for most junk-bond investors, he said.

“I don’t know if there’s enough players who look at high-yield this closely that would be buying an ETF,” said Schawel, the firm’s chief investment officer. “There’s high-yield buyers and ETF buyers. I’m not sure if the overlap is that huge.”

All three planned BondBloxx funds will track ICE BofA indices that use a composite rating from Moody’s Investors Services Inc., S&P Global Ratings and Fitch Ratings Inc., and they’ll cap exposure to any given issuer at 2%, according to the filing.

Tickers and management fees for the ETFs are not yet listed.