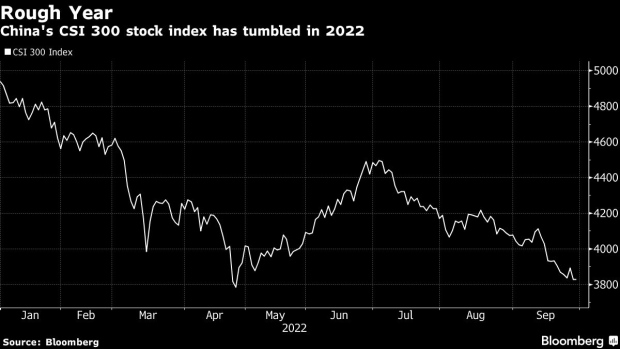 A visitor flies a kite along the Bund in front of buildings in the Lujiazui Financial District at sunrise in Shanghai, China, on Tuesday, Jan. 4, 2022. A wall of maturing debt and a surge in seasonal demand for cash will test China’s financial markets this month, putting pressure on the central bank to ensure sufficient liquidity. Photographer: Qilai Shen/Bloomberg , Bloomberg

(Bloomberg) -- China may be a lucrative wealth management market, but it’s also a difficult one to crack.

Two of the world’s biggest investors, Amundi SA and BlackRock Inc., have stumbled since starting selling wealth products through joint ventures in the country over the past two years. Chinese retail investors have criticized Amundi for falling short of performance targets, while local press have highlighted how some BlackRock’s offerings are making losses.

The slow start comes at a turbulent time for markets, as onshore bond yields slide and an index of the nation’s shares falls more than 20% this year. China’s unique wealth management culture -- until recently, banks and others had promised guaranteed high returns -- is adding to the global money managers’ woes, as irate local investors demand better performance.

“They entered the market at a difficult time,” said Harry Handley, a senior associate at Shanghai-based consultancy Z-Ben Advisors Ltd. “For fixed income-focused Amundi, it faces an environment where onshore yields are falling,” he said. For BlackRock, which focuses more on stocks, “equity volatility has been high and the CSI 300” -- a gauge of Chinese equities -- “has been weak.”

Amundi, Europe’s largest money manager with $1.9 trillion in assets under management, launched a joint venture with Bank of China Ltd.’s wealth management unit in 2020, the first after China allowed global firms to participate in the sector. BlackRock, which oversees $8.5 trillion, started the second with a subsidiary of China Construction Bank Corp. in 2021.

Amundi BOC Wealth Management Co. began selling so-called wealth management products in China in 2020, placing at least 80% of the underlying assets for most offerings in debt. Like peers, it sets what’s called a performance benchmark for each of them, which can take various forms from an exact percentage like 3% to a range or a premium on top of a market rate. These benchmarks came into use after the country started to overhaul the asset management industry, including the 29 trillion yuan ($4.1 trillion) wealth products sector, in 2018, which included banning promises of guaranteed returns.

The benchmarks are headaches for global money managers. If a company sets the rate too low, it won’t attract customers. If it sets it too high and falls short, investors may take their business elsewhere.

To make matters worse, Chinese banks and others have traditionally reached their targets by investing in what’s called non-standard assets, such as risky, opaque and less-liquid debt that isn’t listed on public markets.

It’s a Catch-22 for global asset managers that may not be willing to do the same.

“Amundi made it clear from the outset of this joint venture that it will stay away from the shadow-banking exposure that is a yield-enhancing staple of products from local banks,” Z-Ben’s Handley said. “It is essentially a trade-off between instilling global risk management standards and meeting onshore performance expectations.”

Almost 90% of wealth management products met or exceeded their benchmarks in the first half of the year, according to research firm PY Standard. All but five of the 30 Amundi BOC offerings that had matured as of Sept. 8 fell short of theirs, registration data show.

Retail investors have criticized the Amundi BOC products on social media sites such as Zhihu, the Chinese equivalent of the question-and-answer website Quora, for giving much lower gains than their benchmarks.

Amundi BOC said in an emailed response that wealth management products witnessed fluctuations in the first half of the year due to swings in bond and equity markets. The company’s first batch to mature, which were all one-year, fixed-income products, still delivered positive returns even as markets fell for half the time, it said.

To be sure, non-standard debt, which was widely used to prop up returns before 2018, accounted for just 7% of wealth management products’ assets as of June 30, down almost 6 percentage points from a year earlier, according to official data.

“Some underperforming fixed income-plus products” -- which invest in debt and, for example, equities -- “may not have done well in timing the market this year,” said Zhang Wenchao, president of Shanghai Yunhan Asset Management Co. “Trading capabilities are key for the ‘plus’ part.”

BlackRock CCB Wealth Management Co. initially took a different approach, starting with two equity products. Equity offerings accounted for less than 0.3% of all wealth management products in China as of June 30, according to official data. Fixed income-focused ones make up 94%.

Two of the joint venture’s four products as of late July were sitting on losses, the highest share of loss-making products among wealth management firms, local media 21st Century Business Herald reported last month. BlackRock CCB now has five products, two of which focus mostly on fixed income while one is a more balanced hybrid of equities and debt. The two equities offerings are still loss-making.

Still, as of the end of last month, the equity products were beating their benchmarks, according to Bloomberg calculations.

BlackRock is replacing the head of the China wealth management unit, it said in an emailed statement Thursday.

A spokesperson for BlackRock said it’s committed to offering a range of products to Chinese investors.

Amundi BOC had $11.6 billion in assets under management as of June 30. BlackRock CCB raised more than 7 billion yuan with its five products. The figures are a tiny fraction of the money overseen by Amundi and BlackRock globally.

The stakes are about to get higher. Wealth management products were included as investment options in the government’s framework for establishing an individual pension system earlier this year. The plan is to allow people to open pension accounts that will have tax benefits. Asset managers may raise close to $700 billion under the program in 10 years, brokerage China International Capital Corp. estimates.

Wealth management products are generally a profitable business. Nineteen firms focused on selling them reported a combined $2.3 billion in profit in the first half of 2022, up 68% from a year earlier, according to data compiled by local trade media China Fund News.

Amundi, which won customers partly by setting hard-to-reach performance benchmarks, must decide whether to lower them for future offerings. In a sense, both it and BlackRock are learning the difficulties of China’s unique market.

People’s expectations about wealth management products were shaped over many years, said Zhou Yiqin, president of GuanShao Information Consulting Center, which specializes in financial regulations. “It may take five to 10 years to gradually change them.”