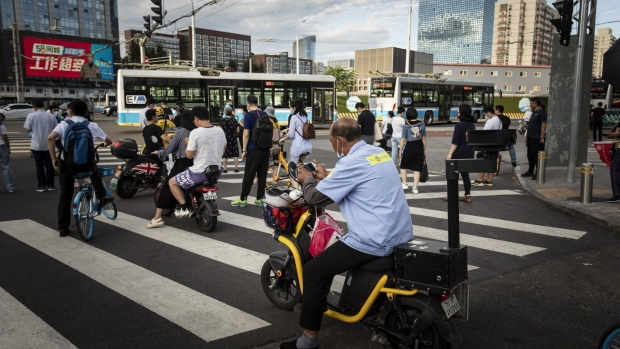 Commuters wait at a traffic intersection in Beijing, China, on Wednesday, Aug. 25, 2021. China's Communist Party vowed to promote the welfare of all people and redistribute income, underscoring its push to achieve "common prosperity" in the country. Photographer: Qilai Shen/Bloomberg , Bloomberg

(Bloomberg) -- BlackRock Inc. is gearing up for the first test of Chinese investor appetite for its own mutual fund products, more than 15 years after entering the world’s most promising wealth market.

“Fund launches are rising steadily and have stayed at high levels” in recent months, said Sun Guiping, an analyst at Shanghai Securities Co. “BlackRock’s first fund is coming right in time to catch a big wave of launches in the second half of the year.”

New mutual funds have raised more than 2 trillion yuan this year through Aug. 18, already the second-highest annual amount ever, only trailing last year’s record 3.1 trillion yuan. The total includes 19 products that netted more than 10 billion yuan in their initial launch.

BlackRock has been issuing mutual fund products with Bank of China Investment Management, which it has held a stake in since 2006. The company also tested the waters a few years ago with a private securities fund business, which ceased operations after it won the mutual fund license as required under Chinese rules.

The BlackRock China New Horizon Mixed Securities Investment Fund will be managed by Alex Tang, a 16-year veteran of investing in China’s A share markets, and Shan Xiuli. It will focus on five growth areas including new energy, retirement and digital transformation, according to the company.

The product will be distributed by three Chinese lenders, led by China Construction Bank, along with seven brokerages including Citic Securities Co., as part of a marketing strategy that appears appropriate to market experts.

Internet platforms, which have been grabbing a growing share in fund distribution from traditional channels partly thanks to lower fees, are absent from the list. That might not matter because the new fund’s fee level is already among the lowest in the market as banks cut charges to win back clients, Lu said.

Still, while global asset managers’ investment strategies have long been closely examined by local investors for signs of foreign capital flows, their onshore funds will have to build a track record to gain relevance, Shanghai Securities’ Sun said.

“Whether BlackRock funds can come up with good investment performance still needs the test of time,” he said. “If they do outperform, market attention on them could rise.”