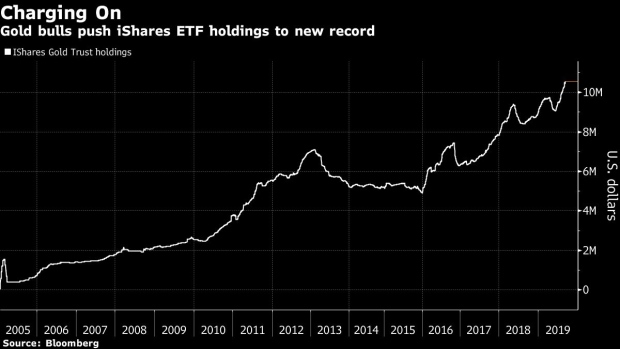 (Bloomberg) -- Exchange-traded fund investors appear to have few doubts about the direction of gold.

Holdings in BlackRock’s iShares Gold Trust, the second-largest bullion-backed ETF, rose to a record on Friday, even as prices of the metal posted a second straight weekly loss. The pile-in came as data showed U.S. payrolls grew at a slower pace in August, fueling haven demand and expectations for monetary easing. Lower rates are a boon for gold, which doesn’t offer a yield.

While gold prices have wavered after four straight monthly gains as investors await fresh catalysts, forecasts for the Federal Reserve to resume rate cuts as soon as this month are underpinning the longer-term outlook for the metal, according to Bob Haberkorn at RJ O’Brien & Associates LLC. Investors poured $96.1 million into the iShares fund last week for a 13th straight weekly increase, the longest such streak since February 2013.

“It’s showing you the broader sentiment of the market, where gold’s going higher, people are looking for rates to get closer to zero, and that’s where you get more flow into ETFs,” Haberkorn, a senior market strategist, said by phone from Chicago. “Overall, whether they’re institutional, they’re retail, individual investors, there is a lot of looking-for-safety out here.”

The Fed will lower rates by a full percentage point between now and January to counter a steep slowdown in the U.S. economy, Deutsche Bank AG economists said in a note Friday. A majority of traders and analysts surveyed by Bloomberg remained bullish on the metal, and money managers boosted their net-bullish positioning to a record, according to U.S. government data released on Sept. 6.