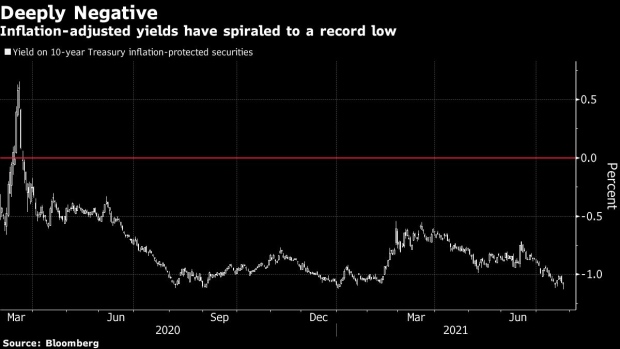 (Bloomberg) -- One key fact has been lost in the whole debate about whether the inflation surge in the U.S. is here to stay or not: Almost no one expected it to get this high in the first place.

Flash back to a year ago and the inflation estimates for 2021 generated by economists and the bond market were a fraction of today’s 5.4% annual rate. For those who saw the risk of price pressures running hot and a market out of touch, piling into inflation-linked bonds has been a great wager, generating better returns than virtually any other corner of the Treasuries market.

Some of those winners, like Vanguard Group Inc., are sticking with the trade, convinced that inflation will continue to run above the Federal Reserve’s 2% target.

Then there’s Bob Miller. The head of Americas fundamental fixed income at BlackRock Inc. is so confident that the rally in Treasury Inflation-Protected Securities has gone too far that he’s not just scaling back his allocation, but actually shorting the debt. He predicts both price pressures and inflation expectations will stabilize in the months ahead.

“Real yields are quite unattractive,” said Miller, who shorted 10-year TIPS by borrowing the securities in the repurchase-agreement market and then selling them. “We are not in the camp that thinks that inflation is going to continue to accelerate at a substantially higher run rate than it has over the past.”

TIPS have returned about 7.4% over the past year. That may not seem like much in a world of meme-stock melt ups, but with 10-year nominal debt yielding roughly 1.25% and down about 2.6% over the span, it’s been a standout trade in a sea of red.

Miller expects breakeven rates, a market measure of inflation expectations, to stabilize around current levels. The 10-year breakeven, the difference between the yield on nominal bonds and TIPS with the same maturity, is roughly 2.4%, up from as low as 0.47% last year at the onset of the pandemic.

Inflation expectations edged up slightly Wednesday, after Fed officials signaled they’re moving closer to reducing their massive support for the U.S. economy. Still, Chair Jerome Powell said there was a ways yet to go, noting “substantial further progress” was needed before the central bank would adjust its $120 billion of monthly debt purchases.

The senior portfolio manager and head of several actively managed debt funds says she doesn’t expect the central bank to deviate from its new policy of allowing inflation to run above target to make up for past misses, nor will it adjust its bond-buying until its gets close to achieving both its employment and inflation mandates.

Vanguard predicts headline consumer inflation of about 5.6% by year-end, before slipping to 3% by mid-2022.

Breakeven inflation expectations “will definitely be floored and have room to run on the upside, to widen out further,” said Wright-Casparius, who oversees Vanguard’s inflation-protected securities fund, a long-only vehicle that never explicitly sells TIPS, but can move between overweight and underweight in various maturity sectors. She foresees TIPS yields remaining “steeply negative.”

The yield on 10-year TIPS fell to a record low of about minus 1.18% this week. The decline in real yields this year reflects investor concerns over the outlook for growth, exacerbated recently due to the spread of Covid-19 variants. Holders have benefited from gains in the market value of the debt as yields have declined from as high as minus 0.54% in February.

TIPS pay interest at a minimum 0.125% rate on principal that’s adjusted for changes in headline CPI. The securities have also been supported by Fed purchases as part of its bond-buying program.

“Intermediate and longer-dated TIPS yields are too low and risk is skewed to the upside, which makes TIPS less attractive for us as an inflation hedge,” Mueller-Glissmann said.

“The delta variant is a big problem,” Nash said. “The pandemic isn’t over.”