BlackRock Inc. has joined a growing chorus of investors and analysts warning of resurgent inflation risks, as the global battle against the coronavirus crisis creates a convergence of ultra-easy monetary policy and expansionary budgets.

While the world’s nations are unleashing unprecedented spending to counter the economic shock from the pandemic, central banks are maintaining ultra-loose monetary conditions to cap the costs of such fiscal largess. This policy combination is now fueling fears of a spike in consumer prices down the line as more money chases fewer goods.

Market-implied price expectations have climbed globally in recent months, fueling a rally in gold, and Wall Street’s heavyweights from Pacific Investment Management Co. to AllianceBernstein Holding LP have cautioned in recent months that inflation is a problem that’s bound to return.

“While there is little likelihood of material near-term inflation, once we look out further into this decade, the co-ordination of monetary and fiscal policy that we have seen -- a blurring of the traditional boundaries -- could bring about upside inflation risks globally,” Vivek Paul, BlackRock’s chief investment strategist for the U.K., said in emailed comments. Investors “should consider global inflation-linked bonds.”

Inflation can wreck even the safest portfolio by eroding investment value for decades. But the younger generation of investors, within developed markets at least, has rarely faced it in any meaningful way -- the last major episode was back in the 1970s and ’80s. Still, the world-altering impact of the pandemic is fueling fears of a comeback. 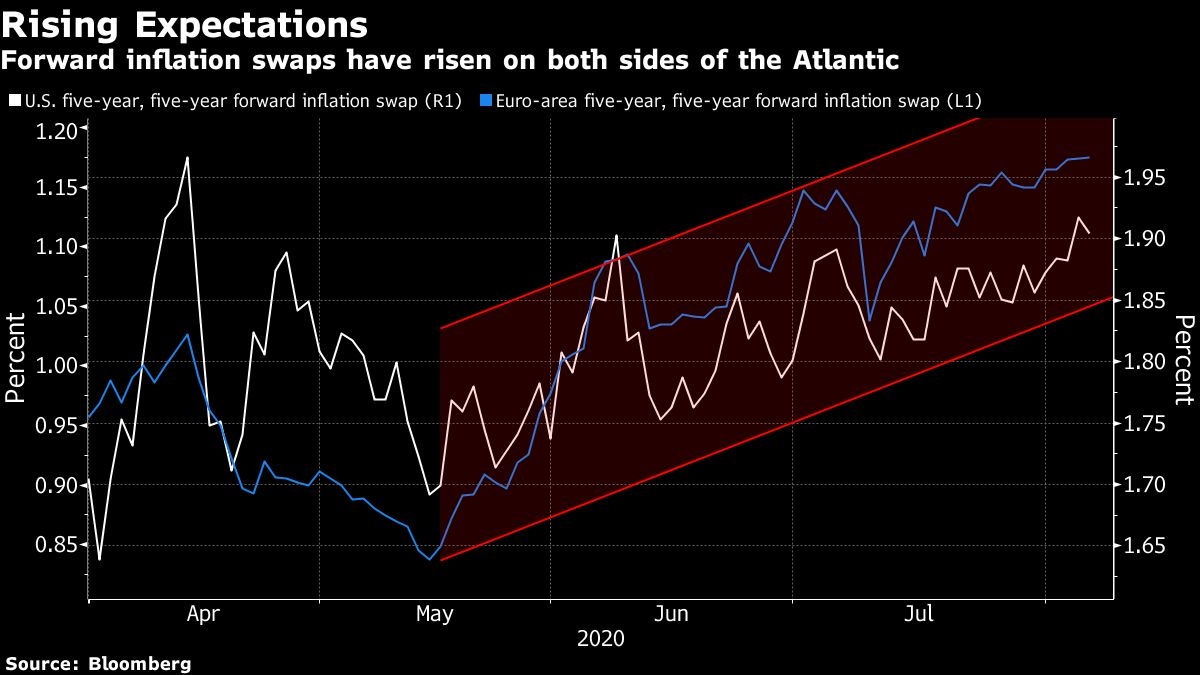 The U.S. five-year-five year forward inflation swap rate, a key gauge of long-term price expectations, has climbed to 1.9 per cent from a record low of 0.97 per cent  in March. Similar measures have also risen in the euro area and the U.K.

A blistering rally in the price gold, a traditional hedge against inflation, also signals rising demand for protection against a potential pickup in prices. Pictet Asset Management’s chief strategist, Luca Paolini, said this week that the fund has an overweight position in bullion given risks including that of “liquidity-induced inflation.”

BlackRock added that the BOE could choose to boost its quantitative easing program again by the end of the year, while traders in money markets are pricing negative interest rates in 2021. Governor Andrew Bailey said after Thursday’s decision that negative rates “are part of our toolbox, but at the moment we don’t have a plan to use them.”

U.K. 10-year real yields, which strip out inflation, are hovering close to record lows at around minus three per cent. The rate on similar-maturity conventional bonds is currently at around 0.11 per cent.