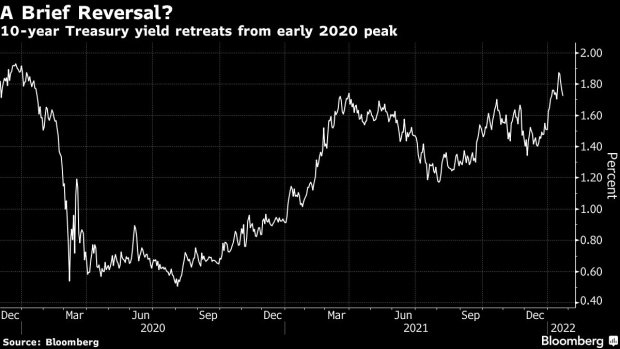 (Bloomberg) -- Higher interest rates pose little threat to stocks, and looking beyond the short-term horizon there are opportunities for equities to gain even as Treasury yields eventually resume their move higher.

That’s the view of the BlackRock Investment Institute, the think-tank arm of the world’s largest asset manager. It also said Monday that while the longer-term backdrop for Treasuries is negative, the market may have gotten ahead of itself in the short term, and it was paring slightly its tactical bet against U.S. securities.

Global equities are a sea of red right now and many are pointing at the prospect of higher U.S. interest rates as a key driver behind a selloff that gathered momentum Monday. But BlackRock says the 2022 equity decline “hides huge shifts under the hood, with tech shares falling and many cyclicals eking out gains.”

“The narrative of ‘rates up, tech down’ is too simplistic given the drivers behind the long-end bond selloff and the broadly unchanged, still-low sum total of expected rate hikes,” analysts wrote in a note Monday.

Few in the market appeared to be paying much heed to that Monday, with the S&P 500 Index on course for its worst trading session of an already ugly year.

Meanwhile, U.S. government debt yields, led by the policy-sensitive two-, and five-year tenors, remain higher by 25 to 30 basis points as futures markets have priced in at least four quarter-point Fed rate hikes during 2022, with balance-sheet reduction expected to start around mid-year. Policy makers meet this week to consider their options for throttling consumer inflation running at its fastest pace since 1982.

“Markets have rushed to price in faster and more aggressive Fed actions than we think is warranted,” BlackRock analysts wrote. “Given the speed of the Fed repricing, bond markets may have gotten ahead of themselves in the short term.”

In the longer term, they wrote, “we still view the outlook for nominal government bonds as challenging and maintain our large underweight.” The pullback in yields from last week’s highs is probably “a short-term reversal” from levels that will be exceeded in the next 12 months.

The 10-year Treasury yield climbed to a peak of 1.90% last week, its highest level in two years, and has subsequently retreated to 1.73%, still more than 20 basis points higher on the year.

BlackRock said higher yields are “consistent with a fundamental asset reallocation driven by investors wanting greater compensation for the risk of holding government bonds,” and that the surge in 10-, and 30-year yields “ultimately shouldn’t hurt risk assets.”

The view was published before Monday’s stock-market selloff became full-fledged, taking the S&P 500 down as much as 4% to the lowest level since June. It’s down more than 10% so far this year.

Rising yields aren’t to blame, though, BlackRock says. Rather, ebbing virus fears have sparked a rotation.

“We like cyclicals as the powerful restart rolls on, and beyond a tactical horizon we still favor solid tech and healthcare stocks because we see them as beneficiaries of structural trends like digitalization and the transition to a net-zero world.”