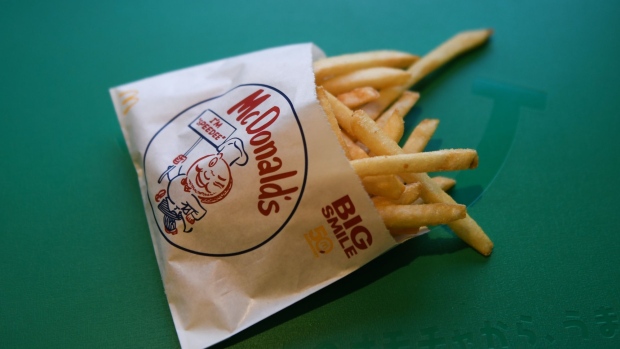 A small-size french fries offered at a McDonald's restaurant, operated by McDonald's Holdings Co. Japan Ltd., in Tokyo, Japan, on Wednesday, Dec. 29, 2021. McDonald’s Japan said Dec. 21 that it would only offer small sizes of french fries after flooding at a Vancouver port and the Covid-19 pandemic cut off key supplies for the staple menu item. The fast-food company has said it expects the issue to be resolved by New Year’s Eve. Photographer: Noriko Hayashi/Bloomberg , Bloomberg

(Bloomberg) -- BlackRock Inc., which agreed to undergo an independent racial-equity audit last year, is expected to vote against a shareholder proposal for McDonald’s Corp. to do a similar assessment of disparities at its sprawling fast-food chain, according to people familiar with the matter.

As McDonald’s second-largest investor, with 6.8% of shares, BlackRock’s opposition to the proposal makes it more difficult to win approval for the non-binding measure. It wasn’t immediately clear how the biggest shareholder, Vanguard Group Inc., plans to vote.

SOC Investment Group called for the McDonald’s audit late last year, saying that its franchised model had created blind spots and possible risks related to the equitable treatment of restaurant workers. SOC said that a third-party audit should take into account input from McDonald’s franchisees, along with suppliers, corporate staff and customers. McDonald’s board has recommended voting against the proposal at its annual meeting Thursday.

A spokesperson for BlackRock, which held 50.4 million McDonald’s shares as of April, declined to comment on the McDonald’s proposal.

Responding to questions about the audit proposal, McDonald’s said in a statement to Bloomberg on Tuesday that it’s committed to diversity, listing pledges for greater disclosure and equal pay. The company included that statement in an amendment to its proxy filing early Wednesday, a practice companies often follow to make sure they’ve legally communicated information to all shareholders.

The proposed audit has been overshadowed by a separate shareholder measure: an attempt by activist investor Carl Icahn to swap in two members of McDonald’s board who would advocate for animal rights policies. That measure is likely to fail, with BlackRock and Vanguard both opposing it, according to people familiar with the matter. BlackRock and Vanguard declined to comment.

BlackRock is among a group of companies ranging from Amazon.com Inc. to Tyson Foods Inc. that have agreed to conduct racial-equity audits amid mounting pressure from shareholders. Such inspections are becoming more common in corporate America following the murder of George Floyd and related protests in 2020. This year, there have been 36 racial-equity proxy proposals among Russell 3000 companies, up from 14 last year, according to Rob Du Boff, a senior ESG analyst at Bloomberg Intelligence. About a quarter of those voted on so far this year have passed, including at Home Depot Inc., which announced its results Tuesday.

BlackRock told employees in a memo last year that an external review of how its diversity, equity and inclusion policies impact stakeholders will provide useful feedback to assess its progress. The New York-based firm said it will start the audit in 2022.

SOC, an adviser to union pension funds, said an assessment at McDonald’s would help the company understand the root causes of problems -- such as sexual harassment and racial discrimination -- and find solutions. A group of Black franchise owners has said the company needs to do more to reduce inequality and systemic barriers for existing minority franchisees.

Other large shareholders, including Norges Bank and the State Board of Administration of Florida, have voiced support for the proposal, Bloomberg reported Wednesday. New York City Retirement Systems, which owned more than 1 million shares in March, is voting in favor of the proposal too. New York City Comptroller Brad Lander said that civil rights audits are important to determine if business policies are contributing to systemic racism.

“Shareholders are increasingly concerned about whether businesses are upholding promises and addressing any risks that can harm their reputations and long-term value,” he said in a statement Wednesday.