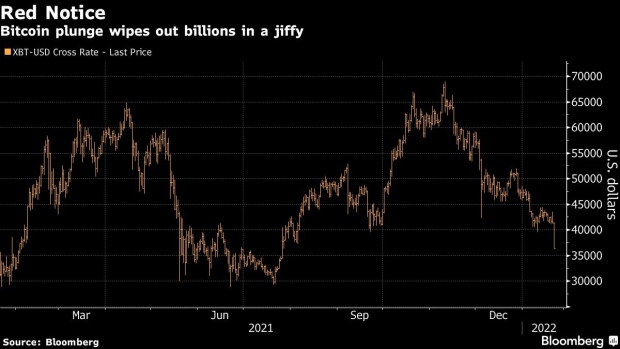 (Bloomberg) -- BlackRock Inc. is stepping into the arena of cryptocurrency-flavored exchange-traded funds in the midst of a $1 trillion wipeout.

The iShares Blockchain and Tech ETF would invest in companies involved in the “development, innovation, and utilization of blockchain and crypto technologies,” according to a Friday filing with the U.S. Securities and Exchange Commission. If launched, it would be the first crypto-adjacent fund in the largest ETF issuer’s lineup.

Salim Ramji, the head of BlackRock’s global ETF business, said on a December episode of Bloomberg’s “Trillions” podcast that a thematic blockchain fund was in the works. The number of ETFs tracking crypto-linked equities has grown to 15 in recent years, according to Bloomberg Intelligence data, as the SEC continues to demur on spot Bitcoin ETF approval.

Ramji said in December that the firm would hold its crypto funds to high standards for liquidity and transparency. “As the regulatory environment becomes clearer, and as the underlying liquidity dynamics of that market become more to our satisfaction, that some of those dynamics will work in our favor,” he added.

Bitcoin briefly fell below $37,000 per coin on Friday, bringing its total drawdown from November’s highs to nearly 46%. That slammed crypto-linked equities and funds, with the $1 billion Amplify Transformational Data Sharing ETF (ticker BLOK) plunging 8% on Friday.

The ticker and management fees for BlackRock’s planned ETF are not yet listed.