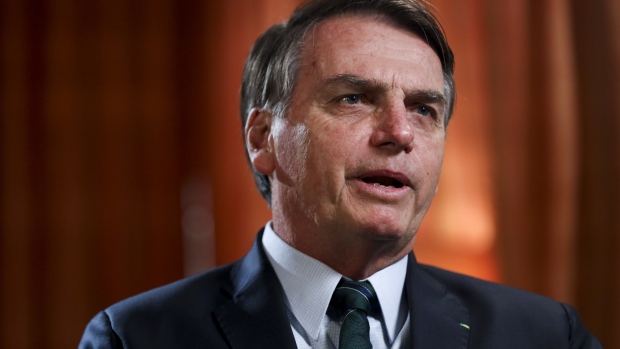 Record-low Brazilian interest rates and optimism in the country’s effort to overhaul its social security are luring investors back to the biggest exchange-traded fund tracking the nation’s equity market.

BlackRock‘s US$8.6-billion iShares MSCI Brazil ETF, known by its ticker EWZ, posted a US$126 million net inflow in the week ended in Oct. 18, the most in eight months. There has been very little money moving into or out of the U.S.-traded fund since June, when investors withdrew US$358 million in one week.

Sentiment toward Brazilian stocks over bonds is growing more bullish as the central bank is expected to continue reducing already record-low interest rates the economy recovering at a slower-than-expected pace and inflation remaining tepid. Economists further reduced their forecast for the benchmark interest rate to 4.5 per cent by the end of this year from 4.75 per cent last week, according to a weekly survey from the central bank published on Monday.

While the Ibovespa equity benchmark has rallied 19 per cent this year, the gains have been driven mostly by local investors. Foreigners have pulled about 4.6 billion reais (US$1.1 billion) out of Brazilian equities in 2019, taking into account both primary and secondary markets, according to data from the nation’s stock exchange. Without the inflows from share sales, the outflow jumps to 30.6 billion reais.

Morgan Harting, a portfolio manager at AllianceBernstein in New York, says Brazilian stocks have more room to run than fixed income, “particularly as progress is made on structural reform and to the extent that local interest rates continue to trend down.”

“Currently, our largest Latin America exposure is in Brazil, and primarily stocks. We had a larger allocation of Brazilian bonds, but took profits as interest rates came down and rotated to equity,” he said.

The final vote on social security reform legislation in the Senate, expected for Tuesday, also might have motivated the ETF inflows, as it can give a a short-term boost to the market.

“There is supposed to be some economic reforms coming up which might be seen as a short-term catalyst for the country,” said Mohit Bajaj, director of ETFs at WallachBeth Capital. “For a short-term play I like the country, especially if interest rates decline to spur growth. But only as a tactical play rather than a long term hold going into year end.”

Will Pruett, a money manager at Fidelity who is overweight Brazilian stocks within Latin America and manages US$542 million, says if interest rates fall more than markets are currently pricing in, meaning the swap rates curve is still too steep, then the equity market could be significantly undervalued.

“This is the real bull argument for Brazilian stocks,” he said.