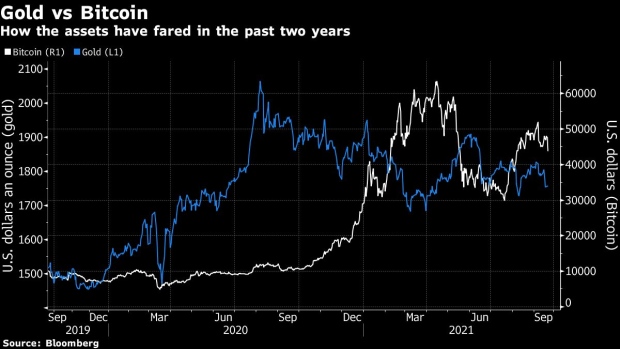 When asked on a virtual London Bullion Market Association panel whether he’d rather be given $10,000 in cash, bullion or Bitcoin, the former the Swiss National Bank governor opted for the greenback. He didn’t explain his reasoning.

Gold prices are down about 15% from last year’s record high on prospects for tighter monetary policy. Last week, BlackRock fund manager Russ Koesterich told Bloomberg TV he’s sold almost all of his gold holdings on expectations that real rates will normalize as the global economy rebounds.

Much of the outlook for gold depends on how consumer prices fare and the Federal Reserve’s timeline for curbing stimulus. Inflation could settle around 3% or a bit higher for “some time” after the current spike caused by snarled supply chains abates, Hildebrand told the panel, citing central banks tolerating price overshoots.

“We aren’t going to have 5%, 6%, 7% inflation, but I am convinced that inflation will trend higher,” he said. “We are in a higher inflation regime than we have been in for the last decade.”

The world’s push to tackle climate change will contribute to higher inflation due to the costs of green production, he added. Still, he doesn’t expect the Fed to raise rates until 2023 at the earliest, with the European Central Bank tightening policy after that.