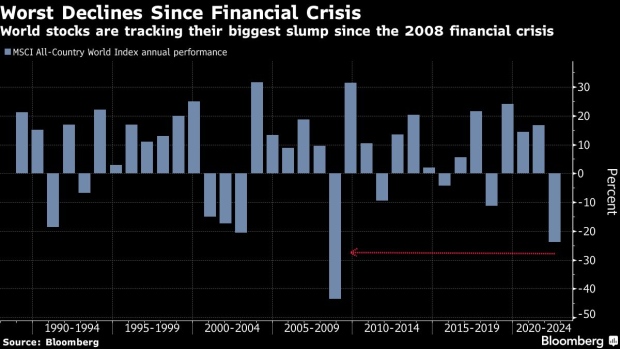 Employees work on the manufacturing floor of the Kevin Charles Fine Upholstery warehouse in New Albany, Mississippi, US, on Monday, July 18, 2022. If American businesses can resist laying off workers in the face of declining sales at the scale they did in past downturns, the country has a better chance of skirting a deep recession. Kevin Charles Fine Upholstery is optimistic that they will retain all their employees. Photographer: Houston Cofield/Bloomberg , Bloomberg

(Bloomberg) -- Upcoming US jobs data will be a crucial test of how stock markets are pricing in recession fears, according to BlackRock Inc.

Stocks and bonds have recently moved in tandem, selling off when hotter-than-expected data are seen to strengthen the Federal Reserve’s case for higher rate hikes.

“If we get a miss or a hit on this number and there’s a divergence in stocks and bonds, that may tell us something about how the market views a recession,” said Thiel. If stocks sell off on a miss, “that’s the recession being priced in, I think it’s a really critical moment,” he said.

Top strategists at Wall Street banks have warned recently that stocks are still not reflecting the risk of an economic contraction and could tumble to fresh lows this year. Even as the S&P 500 nurses year-to-date declines of over 20% and is in a bear market, Citigroup Inc. strategists say it’s only just starting to price in a recession.

Fears over a recession have already spurred traders to price in around a quarter-point cut from the Fed in 2023 in rates markets. Still, Thiel disagrees that central banks will U-turn so suddenly.

“We don’t think they are going to embark on an easing cycle immediately after this, but more of a pause,” he said. Officials including Federal Reserve Bank of Atlanta President Raphael Bostic and Fed San Francisco President Mary Daly have both pushed back on the idea of cuts, arguing that tightening needs to stay in place to bring inflation down.

Thiel also sees greater scope for yields on long-dated debt to rise, arguing that the market is not demanding enough extra compensation for holding bonds for longer periods. The term premium on a 10-year Treasury is still negative, according to a gauge from the New York Fed.

Inflation expectations in the US are also overly low, Thiel added, with the five-year US breakeven rate at around 2.3%.

“If you believe that the supply constraints, US-China trade tensions are going to leave us at an inflation level that’s higher going forward,” he said, “that seems to me an opportunity.”