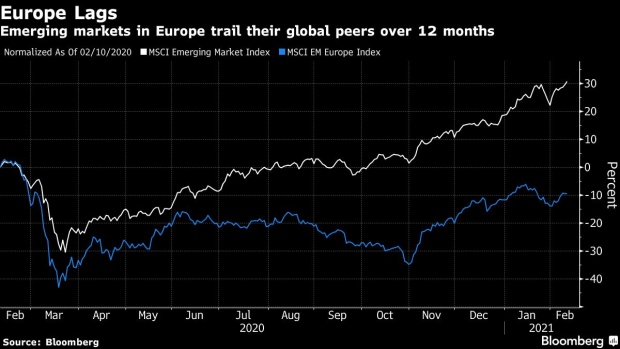 The provision of vaccines and continuing stimulus are likely to fuel earnings growth in the region, he said. European Union spending on sustainable infrastructure is set to feed liquidity into eastern Europe, he added.

“As we enter 2021, the combination of strong liquidity, easy financial conditions and high levels of disposable income are a very powerful mix for earnings growth at a time the vaccine is offering hope of some demand normalization,” said Colunga.

The BlackRock fund manager said he favors exposure to Greek stocks on bets tourism will recover and financial conditions as well as investments will improve. The stock fund has also turned “more constructive” on Turkey after the market’s underperformance and as the new economic leadership team pledges more traditional policies, Colunga said. As of the end of December, the fund had a 9.6% exposure to Greece, its third-biggest, and a 5.5% exposure to Turkey, its fifth-highest.

Colunga said he has reduced the fund’s exposure to its biggest geographic holding, Russia -- which stood at 57% at the end of December -- as the BlackRock team expects political tensions with the West to keep a cap on the nation’s equities.

U.S. and European leaders have condemned Russia for the jailing of Kremlin critic Alexey Navalny, who was sentenced last week after returning from Germany where he had been recovering from a near-fatal poisoning he blamed on President Vladimir Putin’s security services.

The fund manager declined to comment on the extent or timing of the scaling back on Russian holdings.

Among sectors, he favors utilities, which may benefit from green-project financing, and financials, as yield curves steepen. The fund is most underweight on defensives.

Not all money managers share Colunga’s optimism over the outlook for emerging markets in 2021. Morgan Stanley said last week that MSCI Inc.’s gauge of developing country stocks may have already peaked for the year, following “euphoric” fund inflows.

The BlackRock Global Funds Emerging Europe Fund, which Colunga runs with Sam Vecht, is down 4.5% over the past year, compared with the MSCI Emerging Markets Europe Index’s 9.2% slump.