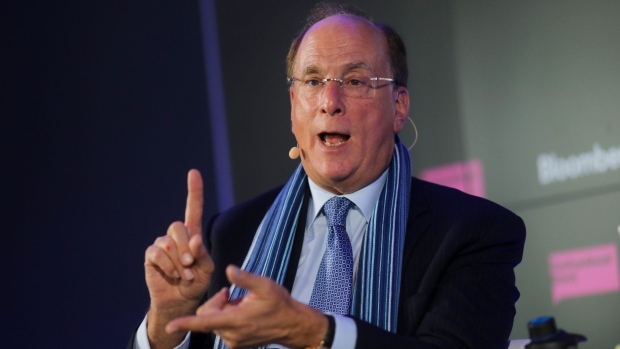 (Bloomberg) -- In the first major test of BlackRock Inc.’s commitment to use its vast influence and resources to fight climate change, the asset manager showed a capacity both for combativeness and restraint.

The $6.5 trillion firm said in a report on Tuesday it identified 244 companies during the 2020 annual proxy season that weren’t doing enough to either prepare their businesses for a warming planet or inform their investors about the possible risks to their operations from climate change. BlackRock voted against directors at 53 of the companies, or 22%, and said it will vote against directors at the remaining 191 next year if they fail to make significant progress over the coming 12 months.

BlackRock’s voting record at shareholder meetings provides the clearest indication yet on how it’s delivering on its January promise to put climate change concerns at the center of its strategy. While it isn’t a complete picture of how the New York-based firm is advancing sustainability and taking companies to task on environmental issues, the report offers some valuable insights into its willingness and capacity to challenge companies and push them to do better.

BlackRock rejected the election of directors at companies, including Exxon Mobil Corp. and Volvo AB, for making “insufficient progress” on climate disclosures. It also voted against a number of more specific climate proposals, which asked companies for anything from extra reporting on corporate emissions to details of their lobbying activities, at companies including Royal Dutch Shell Plc and Total SA.

“The quality of BlackRock’s voting disclosures has improved and is now amongst the best in the market, but Blackrock’s actual voting decisions continue, overall, to disappoint,” said Catherine Howarth, chief executive of responsible investment campaign group ShareAction. “Blackrock is prepared to vote in support of shareholder proposals demanding better corporate climate disclosures, but consistently fails to back proposals demanding real action from high-carbon companies to limit the risks of dangerous climate change. 2020 needed to be the year when the investment and the corporate sectors moved beyond disclosure.”

Larry Fink, BlackRock’s chief executive officer, said in a letter to American corporate executives in January that climate change will upend global finance sooner than they might think and will become “a defining factor in companies’ long-term prospects.”

As such, Fink said the asset manager would make sustainability integral to its business from portfolio construction to new investment products that screen fossil fuels. He also said the firm would strengthen its commitment to transparency in its investment stewardship activities, including shareholder votes.

BlackRock has placed a heavy emphasis on disclosure in its dealing with companies. The firm said in January that investors need more information about how companies are managing the risks and opportunities arising from climate change, and how they are adapting their businesses for a lower carbon economy. It called on companies to publish disclosures in line with the Sustainability Accounting Standards Board and the Task Force on Climate-related Financial Disclosures frameworks.

While BlackRock said it understood that producing comprehensive disclosures requires a significant investment of resources and time, it also said it would be increasingly disposed to vote against management and board directors when companies aren’t making sufficient progress. And that’s exactly what it did voting against directors at companies including Russian miner Evraz Plc and U.S oil giant Exxon.

BlackRock also withheld its support for a number of climate-specific resolutions. A proposal that U.S. liquefied natural gas producer Cheniere Energy Inc. report on how it plans to deal with assets that will be “stranded” in a low carbon economy was deemed by BlackRock to be too prescriptive, while it said the substance of a resolution for France’s Total to enhance its emissions reduction target had already been mostly met.

The asset manager’s lack of support for some resolutions, such as a plan for Japanese bank Mizuho Financial Group Inc. to disclose climate risks and publish a plan to ensure its investments are aligned with the Paris Agreement, left fellow investors disappointed.

Anders Schelde, chief investment officer at MP Pension, said backing from BlackRock, which voted through an independent fiduciary, wouldn’t have been enough to gain majority support, but it would have put a lot of pressure on other big shareholders if another resolution were put forward next year.

“To my mind, it still remains to be seen if BlackRock is truly committed to their new policy of responsible investing,” Schelde said. “Voting is the ultimate test, and on this one, they definitely failed the test in my view.”

Still, while BlackRock’s voting record may not be perfect, it’s vocal support for sustainability and its willingness to reprimand companies for not doing enough to disclose how they are preparing for a transition to the low carbon future is still significant, said Sasja Beslik, head of sustainable finance development at Bank J. Safra Sarasin in Zurich.

“There are usually several competing investor agendas at work in any list of shareholder resolutions and so a vote for or against a proposal doesn’t necessarily always reflect a single investor’s true feelings on the broader issues,” said Beslik. “As for BlackRock, given their size, whatever positive action they take in the climate space makes a big difference for the entire industry.”