As Canada’s yield curve sits on the cusp inverting for the first time in more than a decade, the nation’s central bank believes there’s little cause for alarm. The world’s largest money manager isn’t so sure.

While Canada’s yield curve hasn’t proven as infallible as the U.S.’s in predicting economic downturns, its track record is nonetheless impressive. Since 1961, 10 of 15 inversions were followed by at least one quarter of economic contraction within the next 24 months. That’s based on three-month and 10-year rate data from the Organisation for Economic Cooperation and Development and figures from Statistics Canada.

“The yield curve is something the Bank needs to pay attention to as far as that being a signal of the economy running into a brick wall sooner rather than later,” said Aubrey Basdeo, BlackRock’s head of Canadian fixed income. To the extent flattening “continues to work its way through the rest of the curve, I think that’s a clear indication the Bank’s hiking cycle is near an end.”

The gap between 2-year and 30-year bonds, the shortest- and longest-dated coupon securities, fell to just 12.9 basis points last week, the least since 2007. The spread stood at about 17.9 basis points at the close of trading Wednesday, down from a high of 29 basis points at the start of the month. The gap is about half the 34.1 basis point spread in similar-maturity U.S. Treasuries. 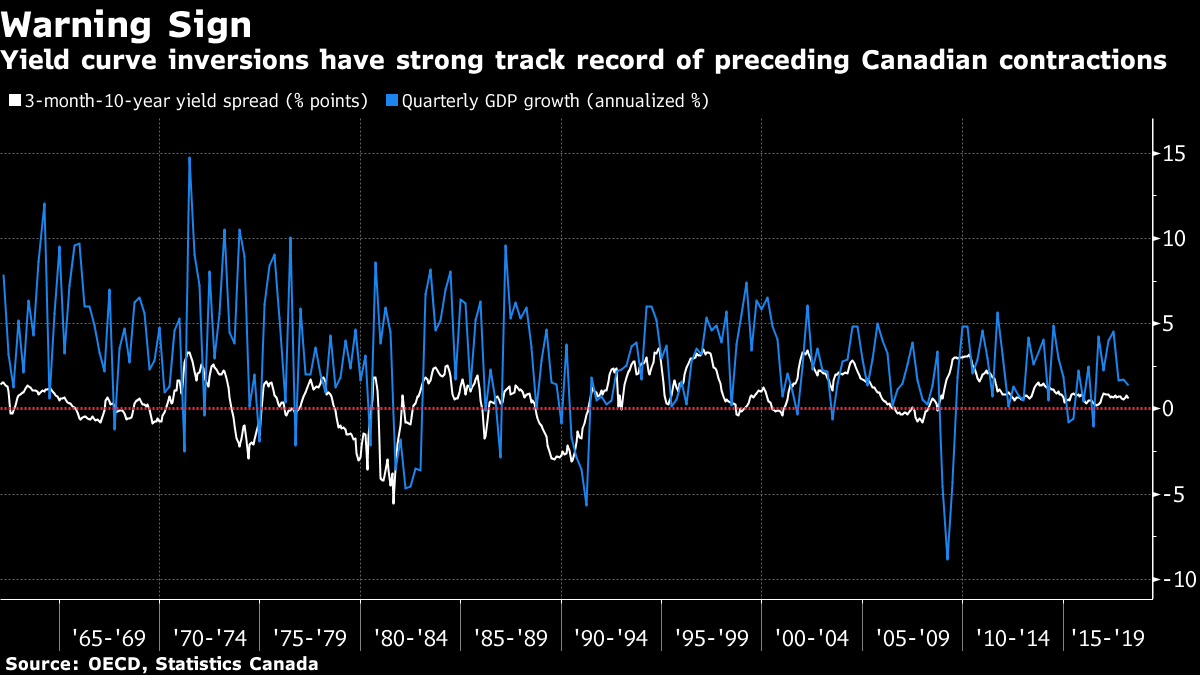 The long end of Canada’s curve dipped below zero last week, echoing a move in May that saw the gap between 10- and 30-year securities invert for the first time in more than a decade.

Inversions of the curve between 3 months and 10 years successfully predicted GDP contractions beginning in 1981, 1990 and 2008, while failing to predict the 2015 slowdown, based on OECD and Statistics Canada data. False inversions, ones which weren’t followed by periods of GDP decline, were notable in 1962 and 1998.

Others say the current bout of flattening is different from previous episodes. Echoing Poloz, RBC Capital Markets head of fixed-income research Mark Chandler points to the “dearth” of long-dated Canadian debt distorting the curve. Additionally, the magnitude of change financial markets have gone through in recent years make it difficult to draw the same conclusions from yield-curve flattening today.

“The rules of thumb that held through expansion and contraction periods 10, 20, 30 years ago, I think you’d have to take them with a grain of salt when you apply them to today,” Chandler said.

There’s little sign from recent data to suggest a slowdown is looming. Inflation reached 3 per cent on a year-over-year basis in July, besting analyst forecasts of 2.5 per cent. And Citigroup Inc.’s Economic Surprise Index for Canada rebounded to the highest level since February this month, after sinking to a five-year low in June.

As a result the BOC remains firmly in tightening mode, following four interest-rate increases since mid-2017. While markets expect officials to hold rates steady at next week’s meeting, short-end traders are pricing in roughly 80 per cent odds that the central bank will hike by October. Expectations for further tightening have helped make the Canadian dollar the second-best performing Group-of-10 currency this quarter versus the greenback.

Yet with policy makers set to gather, Basdeo would urge them not to discount the curve’s warning.

“I would point out to the Bank that if you look at the start of the flattening of the yield curve, as soon as you started to hike you see the track of flattening,” he said. “So I think that’s a bit of a deflection the Bank is making without putting all of the factors into consideration.”