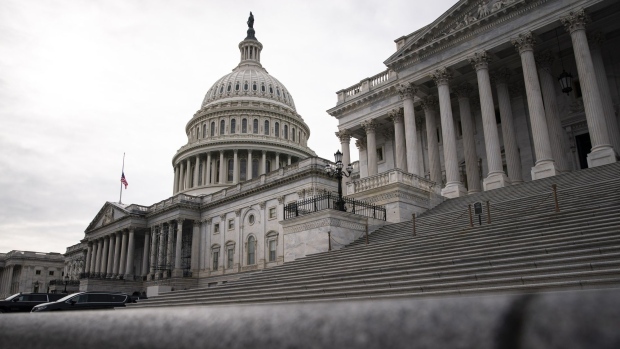 The US Capitol in Washington , Photographer: Al Drago/Bloomberg

(Bloomberg) -- Republicans in the US Senate are amping up efforts to rein in BlackRock Inc., State Street Corp. and Vanguard Group Inc. on environmental, social and governance issues — a preview of a fight looming when the GOP takes control of the House next month.

The three asset managers are using their stakes in public companies to cast proxy votes that favor a “liberal political agenda,” according to a Tuesday report from GOP staff on the Banking Committee. Although the document isn’t binding, and is unlikely to sway Democrats who will maintain control of the chamber next year, it lays out a fresh strategy for Republican critics of ESG investment strategies.

Over the past year, Republican lawmakers have sharpened their attacks on investment firms, trade groups and corporations that they say have backed ESG-friendly policies. In particular, BlackRock, State Street and Vanguard, which can vote on behalf of their shareholders in proxy votes, have been cast as among the biggest perpetrators.

The stakes were raised last month when the GOP won control over the House. Republicans in both chambers have signaled that they plan to make ESG-related efforts by investment firms and Biden-appointed regulators a focus in 2023.

In Tuesday’s report, the GOP staffers alleged BlackRock, State Street and Vanguard are taking advantage of securities rules to make only limited disclosures about their plans to influence corporate boards. The report said the firms’ votes on ESG issues means they’re really active and not passive investors and should have to disclose more about their intentions.

Specifically, they called for congressional investigations into how the firms influence corporate policies on carbon emissions reduction, board diversity or racial-equity audits.

BlackRock said the report’s conclusions “are built on flawed premises and risk harming millions of everyday investors that rely on mutual funds and exchange-traded funds to help them retire with dignity.” If pursued, the recommendations would raise costs for individual investors, the company said.

State Street said it was open to discussions with policymakers about how to address their concerns, despite disagreeing with the report’s findings. “The report ignores the critical role of index funds in helping average Americans save for retirement by providing access to low-cost investments,” the firm said in a statement.

Vanguard said it’s weighing more ways to include individual investors in proxy votes. “As the only investor-owned asset manager, our interests are squarely aligned with empowering everyday investors to reach their long-term financial goals, leaving management decisions to companies and public policy decisions to policymakers,” the firm.

The asset management industry has already started to experiment with providing more proxy voting rights to individual investors. Vanguard said in November that it would let individual investors directly vote on proxy ballots as part of a pilot program beginning early 2023. BlackRock also has a “voting choice” program.

The report is meant to support legislation co-sponsored by Pat Toomey, a Pennsylvania Republican who’s the ranking member of the Banking Committee, and Dan Sullivan, a GOP senator from Alaska. Toomey is retiring. Their bill, known as the “Investor Democracy is Expected” or INDEX Act, would require investment advisers of index funds to vote proxies based on their investors’ wishes.

In another salvo against the ESG movement, six Republicans on the House Judiciary Committee sent a letter Tuesday to senior representatives of the  California Public Employees’ Retirement System and Ceres, a climate policy nonprofit, demanding information on whether the entities’ ESG policies “violate antitrust laws.” Representatives for Ceres and CalPERS didn’t immediately comment.

--With assistance from Annie Massa.