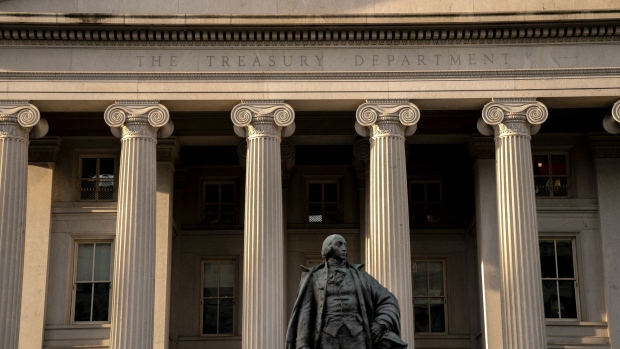 The U.S. Treasury Department building in Washington, D.C., U.S., on Tuesday, April 27, 2021. President Biden and House Democrats are clashing over how much to prioritize an extension of an expanded tax credit for parents. Photographer: Stefani Reynolds/Bloomberg , Bloomberg

(Bloomberg) -- BlackRock Inc., Vanguard Group and Van Eck Associates are among large asset managers facing a ticking clock if they want to unload stakes in financial firms sanctioned for Russia’s invasion of Ukraine.

The U.S. Treasury Department gave fund managers until May 25 to find non-U.S. buyers for their equity and debt holdings in five Russian entities, including VTB Bank PJSC and VEB.RF. The firms also must sever business ties with VTB, which was stripped of its access to infrastructure for the settlement of trades in European markets.

“Portfolio managers face a balancing act between complying with sanctions and complying with their obligations to fund shareholders under other laws and objectives, which include trying to match an index,” said Jay Baris, a law partner at Sidley Austin. “In a volatile market they must determine whether to hold the securities or sell them to a non-U.S. person at a price that could be a fire sale.”

A Treasury official said the effective dates of the sanctions were delayed to help firms unwind positions in the affected Russian financial institutions.

The extra time will “alleviate the need to rush to the market to sell,” said Darshak Dholakia, a Washington-based partner at Dechert LLP who specializes in sanctions and national security law.

After May 25, investment funds will need to freeze their holdings in the sanctioned companies and won’t be able to trade their stocks or bonds under the current guidelines, Dholakia said. That would leave funds with illiquid holdings that are difficult to value.

Many of the funds at issue are passively managed ETFs, which track broad stock or bond indexes that include the Russian firms. For money managers, this makes it harder to comply with the sanctions because they need to wait for index providers to make changes to the underlying indexes. They also may need to warn investors that their strategies could deviate from the original objectives.

The asset managers have been down this road before.

In 2017, the Trump administration imposed sanctions on Venezuela, barring the trading of new debt issued by that government and its state oil company in U.S. markets. Those bonds were among the most-traded securities in emerging markets and were widely held by some of the biggest fund managers, including BlackRock and Vanguard.

Those two firms are also large holders of shares or bonds in the two Russian banks, according to the latest available data compiled by Bloomberg.

BlackRock’s $308 million iShares MSCI Russia ETF, designed to give investors exposure to Russian stocks, has a stake of almost $2 million in VTB, the data show.

“We are taking all necessary actions to ensure compliance with applicable sanctions laws and regulations,” BlackRock, the world’s biggest asset manager, said in a statement.

A spokesman for New York-based Van Eck said the firm is monitoring the U.S. sanctions and will comply with them. Vanguard, whose funds also had exposure to VTB Bank as of Jan. 31, said it’s reviewing the sanctions to determine how they will affect its portfolios.

ETF provider Direxion warned investors that it indefinitely suspended the creation of additional shares for a Russia-focused fund it manages.

“During this time, the fund may not meet its investment objective, may experience increased tracking error and may experience significant premium/discounts and bid-ask spreads,” Direxion said in a statement.

“While markets currently remain open and functioning, our portfolio management and compliance teams are actively monitoring this rapidly evolving situation,” she wrote in a post Friday on the firm’s website.