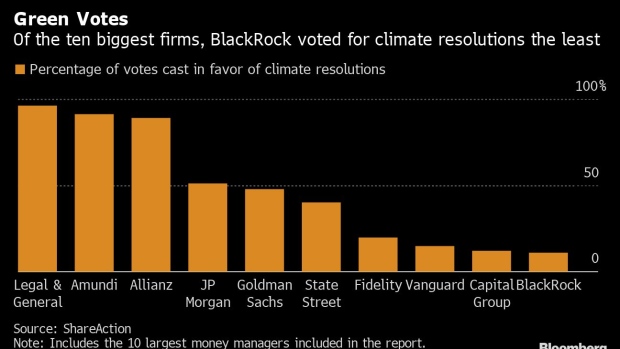 (Bloomberg) -- The world’s two biggest money managers gave their support to less than a sixth of shareholder climate and social resolutions, despite commitments to do more to combat the effects of climate change.

BlackRock Inc. and Vanguard Group Inc., with a combined $14 trillion in assets, were among the least supportive, voting in favor of just 11% and 15% of climate resolutions in the 12 months through August, according to a report from responsible investment campaign group ShareAction. While 15 out of 102 such shareholder votes passed, more than double could have done so with support from one or more of the largest three managers.

“Given the scale of the climate crisis, it is concerning that some investors shy away from voting on critical resolutions at high carbon companies,” said Jeanne Martin, one of the authors of the report. “Investors need to support resolutions pushing for greater ambition.”

Vanguard judges each shareholder proposal on its merits, engages with company leaders on ESG issues and may use proxy voting to effect change if a firm doesn’t make progress, a spokesperson said. BlackRock engaged with over 2,000 companies in the last proxy season and voted against 5,100 directors when its expectations were not met, a spokesperson said.

Climate change, together with the raft of social inequalities laid bare by the pandemic, has increased institutional and retail demand for sustainable investments. And while that has been a boon for money managers -- assets held in sustainable funds grew by more than $200 billion in the first nine months of 2020, according to data from Morningstar Inc. -- it also comes with a burden of responsibility.

However, there is little evidence of the Covid-19 crisis affecting shareholder voting decisions in support of social resolutions, ShareAction said. BlackRock and Vanguard voted for just 12% of these, and the only ones that passed overall were on diversity, it found.

That could be partly explained by the lack of a unifying goal similar to the Paris Agreement for climate, and a “relative lack of maturity” of investor stewardship in the social space, ShareAction said.

Such voting is a key way in which major shareholders can use their influence, and investors and activists are watching to see if votes line up with public statements. While U.S. fund managers lag behind their European peers, they often face greater scrutiny because they manage more assets.

The conviction of some firms has already been called into question. Vanguard was given a low score for incorporating environmental, social and governance factors into investment decisions by Morningstar last month, because such strategies accounted for only a fraction of assets under management and it has a relatively small team focused on them.

Activists have held demonstrations outside BlackRock’s offices to push for change. At the start of the year, its Chief Executive Officer Larry Fink publicly put climate at the center of the company’s investment strategy. The firm will support shareholder proposals that address necessary action on sustainability consistent with long-term value, its spokesperson said.

Support for resolutions from State Street Corp., the third biggest manager, was higher at 40% for climate and 29% for social ones. Together with BlackRock and Vanguard, the trio account for around a quarter of votes cast on companies in the S&P 500 Index.

The firm with the highest voting in favor of these resolutions was sustainable investing specialist Impax Asset Management Group Plc, at 100% for both climate and social. It was closely followed by Aviva Investors, PGGM Investments and Man Group Plc, all Europe-based.

Some U.S. managers are increasing their support, the report shows. JPMorgan Asset Management voted for 51% of climate resolutions, up from 7% in the preceding 12 months. However, members of Climate Action 100+, an initiative that aims to put pressure on the world’s largest polluters, were among those failing to vote in favor of climate resolutions.