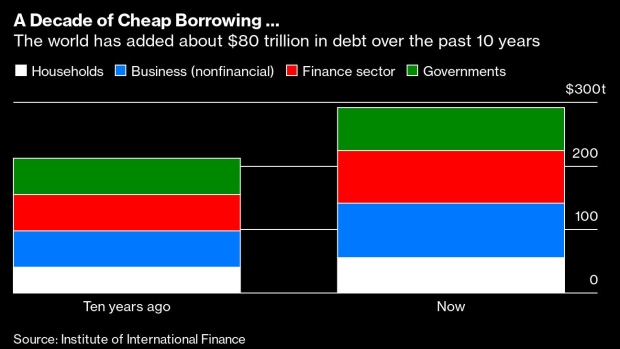 (Bloomberg) -- Next year, throw out the old playbook of buying long-dated government bonds in a recession, says the research arm of BlackRock Inc., the world’s biggest asset manager.

“If anything, policy rates may stay higher for longer than the markets are expecting,” BlackRock strategists including Wei Li and Scott Thiel wrote in a note. “Investors also will increasingly ask for more compensation to hold long-term government bonds.”

Investors who were willing to lend to rich governments on the cheap after the global financial crisis are now pushing back against fiscal largesse. Ballooning government debt was tolerated as easy-money policies suppressed borrowing costs. No longer.

In the US, the average yield on government debt across maturities has risen to 2.19% from 1.55% at the start of the year, which was the lowest in at least 22 years, according to Bloomberg data.

“So-called bond vigilantes are back,” BlackRock said in its 2023 outlook report. “In the old playbook, long-term government bonds would be part of the package as they historically have shielded portfolios from recession. Not this time, we think.”

The UK felt the wrath of vigilantes first-hand, as market pushback against unfunded tax cuts in September turned into a financial crisis that eventually toppled Liz Truss’s government.

Investors will have to make more frequent portfolio changes as they navigate the end of four decades of “largely stable activity and inflation,” according to BlackRock. With central bankers acting to rein in inflation, a key theme of 2023 will be to correctly price the economic damage caused by the ensuing recession, the firm says.

BlackRock is underweight stocks in the near term, saying valuations don’t fully reflect those risks yet. Bucking the trend of recent years, bonds and stocks can decline at the same time, because central banks are unlikely to come to the rescue, according to the firm.

“We will turn positive on equities when we think the damage is priced or our view of market risk sentiment changes,” according to the report. “Yet we won’t see this as a prelude to another decade-long bull market in stocks and bonds.”

The strategists expect the Federal Reserve and other central banks to eventually back off from interest-rate hikes as the economic damage “becomes reality” -- even as inflation remains above official targets.

They see US rates peaking at 5% in the first half of 2023, although they predict that three structural shifts will keep inflation higher than the targets in years to come: aging population which shrinks workforces, geopolitical fragmentation which reduces economic efficiency and a transition to a lower-carbon world.

For now, it’s time to stay risk-off, according to BlackRock.

“We could see markets look through the damage and market risk sentiment improve in a way that would prod us to dial up our risk appetite,” BlackRock said in the report. “But we are not there yet.”

--With assistance from Ben Holland.