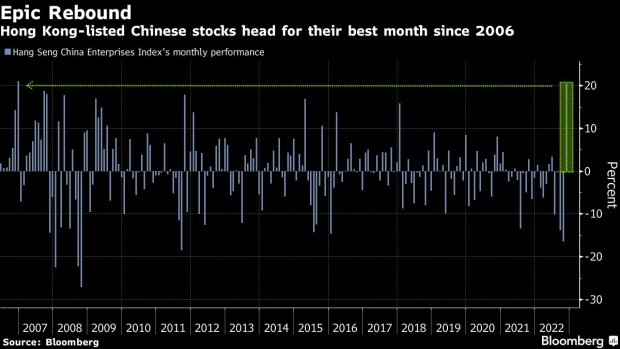 (Bloomberg) -- BlackRock Inc., the world’s largest asset manager, says it’s cautious on the longer-term outlook for Chinese stocks even as sentiment toward the market is turning more positive.

“Geopolitics remains a key risk,” portfolio managers including Belinda Boa, head of Asia Pacific active investments, wrote in a 2023 outlook report. Among other concerns, there’s uncertainty on the possible impact of new U.S. policies on sectors beyond semiconductors as well as potential retaliatory measures, they said.

Privately owned enterprises and foreign investors also face a potentially “adverse climate” given the bigger emphasis on ideology relative to the past few decades in China, according to BlackRock. The money manager’s tone breaks with the growing bullishness toward China and is markedly different from its own view a year ago.

November has seen a big rebound in Chinese stocks as the government unveiled guidelines to ease its Covid Zero approach, with investors piling in as valuations appeared to have priced in a lot of the bad news. The Hang Seng China Enterprises Index has surged 21% so far in November, on track for its best month since 2006.

While BlackRock now sounds apprehensive on Chinese equities further out, it acknowledges that economic growth and the market may surprise to the upside if the property sector stabilizes and pandemic curbs are relaxed.

Economists so far are quite pessimistic on China’s growth prospects in 2023, seeing 4.9% of expansion next year, according to a survey conducted by Bloomberg News. Nomura Holdings Inc. cut its projection for this year’s expansion to 2.7%.

“The mostly bearish sentiment has led to oversold equity positions and attractive valuations, while the earnings outlook has moved from challenging to more optimistic on a relative basis,” the fund managers wrote.

Here are some other takeaways from BlackRock’s report: