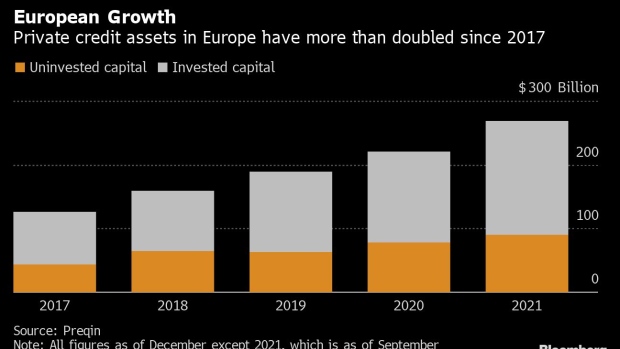 (Bloomberg) -- Blackstone Inc. is starting a private credit fund aimed at wealthy European investors, according to people familiar with the matter. The fund, the first of its kind in the region, will be based in Luxembourg, having been approved by the country’s regulators on Friday.

The move is a significant step in bringing the complex and illiquid world of private credit within reach of individual investors, who have previously been shut out of the market. Blackstone and other big asset managers have found success with similar funds in the US, which offer higher yields in exchange for higher risk.

A spokesperson for Blackstone declined to comment on the new fund.

Private credit has boomed into one of the hottest parts of European asset management, with firms plowing billions into direct financing deals and investors eager to snap up rich returns in an area previously ruled by Wall Street banks.

For Blackstone, the new fund will potentially bring a wider pool of Europeans into the reach of its $222 billion private wealth business. Blackstone plans to run it as a perpetual fund, the people said, allowing investors to deploy and extract their money more fluidly, rather than the fixed-term structure that’s traditionally been used for credit vehicles in Europe.

The perpetual structure is considered preferable in the industry because it offers managers a stable capital base for new investments and the potential for more fees in the long run. Historically, it’s been more common in the US market.

Americans have been able to tap the private credit market by investing in business development companies, which provide direct financing to small, fast-growing firms. Known as BDCs, they tend to be run as publicly traded closed-end funds. There are also a growing cohort of non-traded BDCs, including the Blackstone Private Credit Fund, which has reached $37.8 billion in just over a year.