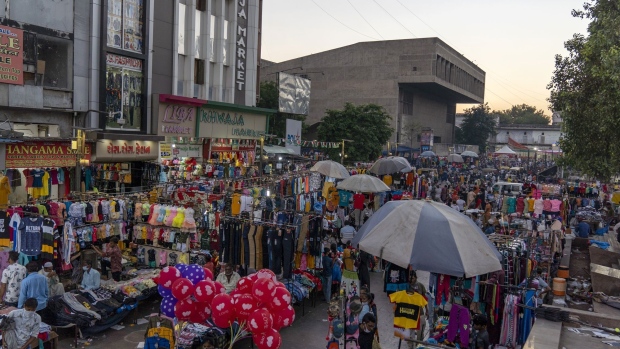 Shoppers and pedestrians walk past stalls at the Bhadra Fort market in Ahmedabad, India, on Thursday, Oct. 22, 2020. , Bloomberg

Some of the world’s biggest investors are snapping up office space in India with plans to turn them into real estate investment trusts, betting that demand will sustain and provide attractive yields in coming decades.

Brookfield Asset Management Inc. in October agreed to pay US$2 billion for 12.5 million square feet of rent-yielding offices and co-working spaces in Asia’s No. 3 economy. That’s the biggest real estate deal ever for India. Blackstone Group Inc. bought US$1.2 billion of malls and other commercial properties from a local developer, set to further expand its 9.6 million square feet of fully-owned real estate assets in India.

These assets will probably be folded into existing REITs or listed as new ones, according to the people with knowledge of the matter, who asked not to be identified citing rules. Blackstone is the backer of Embassy Office Parks REIT, which raised US$689 million in the country’s first such listing in April 2019. That was followed by another REIT that’s also backed by Blackstone in August, while Brookfield is looking to list one in Mumbai before the end of this year. At least two more are in the pipeline for 2021, the people said.

“The India story happened when offices were available for a dollar, that has still not dramatically changed, you still have offices available at a dollar per square foot per month,” said Quaiser Parvez, chief executive officer at Nucleus Office Parks that manages Blackstone’s office portfolio. “India will continue to be strong pivot or puller of these organizations.”

The attention is focused on the country’s office market, where low-cost call centers have made way for research laboratories that offer more stable clients and surer rents. Rolls Royce Plc has a facility in a building owned by Blackstone in southern India and Novartis AG has a team of doctorates. Brookfield’s technology park in northern Gurgaon has tenants including Cognizant Technology Solutions Corp. and Genpact Ltd. 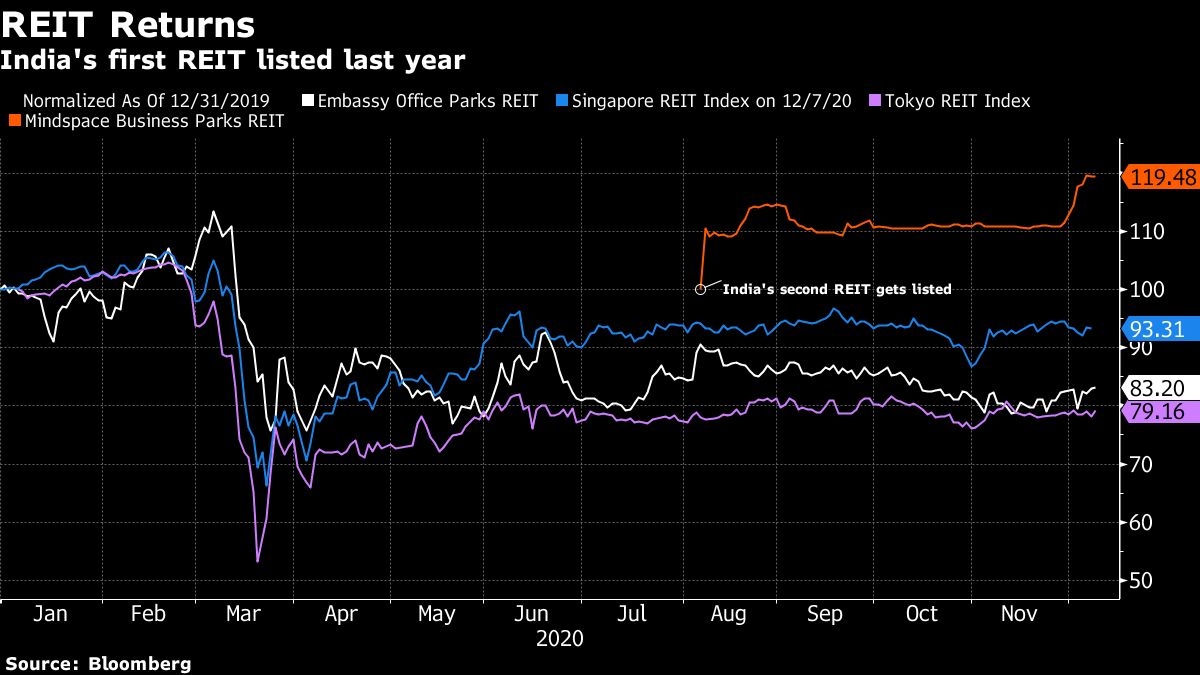 High returns are luring investors to REITs amid low interest rates globally. The REITs already listed in India provide yields of 7.5 to 8 per cent, compared with 3 to 5 per cent in cities such as Singapore, Beijing and Sydney, according to Ivanhoe Cambridge, the realty unit of Canada’s second-biggest public pension fund, Caisse de depot et placement du Quebec.

Currently, the Indian REIT market is dominated by institutional investors and wealthy individuals due to a regulatory requirement of a minimum 50,000 rupee (US$700) investment in a nation where more than half the population earns less than 10,000 rupees a month. Kotak Mahindra Asset Management Co. on Monday opened the Kotak International REIT Fund of Funds, India’s first diversified REIT mutual fund, which will invest in units of SMAM Asia REIT Sub Trust Fund.

Local developer Panchshil Realty, who has Blackstone as a partner for the majority of its 22 million square feet of offices, is considering a REIT next year to allow institutional investors to exit, Chairman Atul Chordia said in a phone interview.

“You build an office portfolio, you lease it, and you REIT it,” Chordia said. “You can raise capital and cut down your debt.”

The coronavirus outbreak has left India’s office-property market largely unscathed. Most landlords housing large information technology and multinational companies collected 95  to 99 per cent of rents despite one of the world’s strictest lockdowns, exchange filings show.

Even firms looking to permanently transition to flexible working conditions are leasing offices in India. Standard Chartered Plc, which aims to offer hybrid work to more than 90 per cent of its employees over three years, will rent space from Indian developer DLF Ltd. for 15 years for one of its biggest global campuses.

Investors pumped US$15.4 billion into India’s office properties in the last 10 years -- with about US$2 billion in 2020 before the massive Brookfield and Blackstone transactions -- according to data from Knight Frank. Private equity funds hold 84 per cent market share followed by sovereign wealth funds and pension funds. The research firm estimates 206 million square feet of office space was transacted in the last decade, of which 62 million have been converted into REITs, leaving a potential 144 million square feet.

Ivanhoe Cambridge is looking to increase investment in India but will wait to see how the market shapes post-pandemic. A deepening secondary market is among the attractions, said Managing Director Chanakya Chakravarti. PR Dilip, founder of fund management company Impetus Arthsutra, has invested in the Embassy REIT.

“Of late, the minimum ticket size to own a commercial property had become too large for a retail investor, besides the illiquidity factor in the real estate market,” Dilip said. “REITs have provided a new opportunity.”