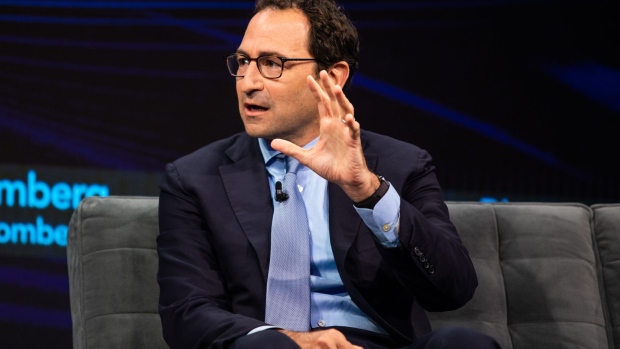 Jon Gray, president and chief operating officer of Blackstone Group LP, speaks during the Bloomberg Invest Summit in New York, U.S., on Tuesday, June 4, 2019. Bloomberg Invest Summits bring together people in finance, economics and markets to tackle the most complicated issues, helping investors make profitable decisions in 2019 and beyond. , Bloomberg

(Bloomberg) -- With almost $140 billion on hand for deals, Blackstone Inc. President Jon Gray is ready to bet the firm can profit from recent technology selloffs, the economy’s reopening and a rebound in travel.

A rough start to the year for Silicon Valley and biotechnology stocks opened up opportunities, and will push pharmaceutical companies to seek private equity partners for drug development, Gray said in an interview as his firm posted quarterly results that beat analysts’ estimates. Educational-technology and cloud-computing ventures are attractive, too, as the firm looks to put its dry powder to work, he said.

“The tech selloff is healthy because there was some excess,” Gray said. Other areas of interest include infrastructure, last-mile logistics, transportation and hotels as commerce and business travel pick up.

It’s a reminder of how tumultuous markets -- rattled by inflation, geopolitical tensions and economists giving rising odds of a U.S. recession in the next year or so -- can still be an opportunity for private equity.

Blackstone’s first-quarter earnings beat predictions as it locked in profits on past deals and boosted its stream of fees from assets. Distributable earnings jumped 63% to $1.9 billion, compared with the first three months of the prior year. That amounted to $1.55 per share, surpassing the $1.05 average of analysts’ estimates compiled by Bloomberg. The metric is closely watched by Wall Street because it represents earnings available to shareholders. Assets under management are up 41% from a year earlier to more than $915 billion.

The firm wasn’t immune to the broader challenges from rocky markets. While its real estate investments provided a boost, with opportunistic holdings appreciating 10%, gains in private equity were more muted. Corporate private equity appreciated 2.8% in the quarter.

Net income fell 30% to $1.22 billion --  a metric that, based on generally accepted accounting principles, also reflects shifts in the value of deals that the firm has yet to exit. Market declines in the first quarter can take a toll on valuations, and so too can expectations for rising interest rates. The private equity industry relies heavily on debt for acquisitions, and higher rates can erode the value of future cash flows and make it harder to sell big assets.

Still, the firm’s fundraising machine continued to whir. Blackstone drew $50 billion in inflows during the quarter, with money from individuals flowing into funds that lock up fees for the long haul.

Successful exits generated $23.2 billion, up by more than half from a year earlier. Some $519 million in profits tied to those exits went to dealmakers and executives, more than triple what they collected back then.

Blackstone’s stock is down almost 7% this year, slightly worse than the S&P 500. The selloff in tech stocks has carved 14% off the Nasdaq Composite Index.

Blackstone doesn’t have direct exposure to Russia, Gray said, but the firm said it’s mindful of the broader geopolitical landscape. Investors should pay close attention to the trade tensions between the U.S. and China, he said.

“They do an enormous amount of business together, and I do subscribe to the idea that trade is important to mitigate tensions,” Gray said. “But you have to be mindful of tensions on both side.”