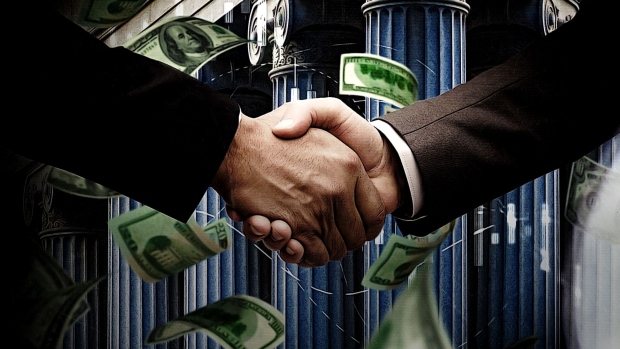 (Bloomberg) -- A consortium of private equity firms is nearing a deal to buy medical supply company Medline Industries Inc. for more than $30 billion, according to people familiar with the matter, in what would be one of the biggest leveraged buyouts of all time.

The group, comprising Blackstone Group Inc., Hellman & Friedman and Carlyle Group Inc., is in advanced talks with Medline and a deal could be finalized in the coming days, the people said, asking not to be identified discussing confidential information.

The team beat out Canadian investment giant Brookfield Asset Management Inc. which was bidding on its own, the people said.

Based in Northfield, Illinois, Medline is the biggest private U.S. manufacturer and distributor of medical supplies like medical gloves, gowns and exam tables to hospitals and doctor’s offices. The company is run by the billionaire Mills family: Chief Executive Officer Charlie Mills, his cousin Andy Mills, who is president, and Chief Operating Officer Jim Abrams, who is Charlie’s brother-in-law.

Charlie and Andy took the reins in 1997 from their respective fathers, Jim and Jon Mills. Those brothers founded the company together in 1966, taking inspiration from their grandfather who helped sew gowns for surgeons at a hospital in Chicago before the first World War.

At least eight buyout firms had last month been preparing offers for the company, some lured by the prospect of getting the first shot at slashing costs and maximizing profits at a massive company in Medline that’s never been touched by another buyout firm.

By June 1, the bidding group had been narrowed down to three parties: the Blackstone consortium, Brookfield bidding on its own and a separate consortium that included Bain Capital, Advent International and CVC Capital Partners.

Bain’s consortium decided not to submit final bids after the final deadline was abruptly accelerated by several weeks, some of the people said.

Medline generated $17.5 billion in sales in 2020, a representative said previously.