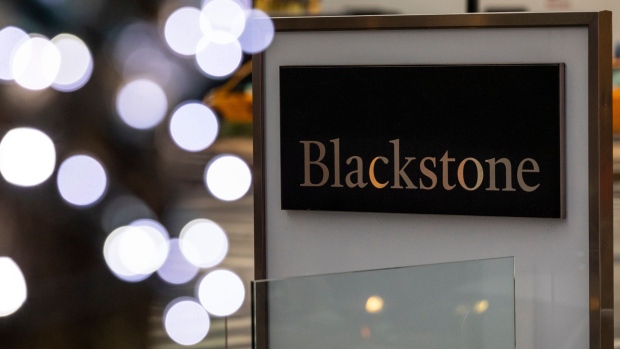 Signage outside the Blackstone headquarters in New York, U.S., on Tuesday, Jan. 25, 2022. Blackstone Inc. is scheduled to release earnings figures on January 27. , Bloomberg

(Bloomberg) -- Emerson Electric Co. is in talks with Blackstone Inc. to sell at least part of its commercial and residential solutions business, according to people familiar with the matter.

A deal could be valued at between $5 billion to $10 billion, depending on how much of the portfolio changes hands, said the people, who asked to not be identified because the talks are private. No final decision has been made and discussions could fall through.

If the transaction is agreed, it would mark a sizable private equity deal in an increasingly difficult environment. Tightening credit markets and slowing economic growth are keeping many buyout firms on the sidelines.

Emerson shares rose as much as 2.9% in pre-market trading. The stock is down about 16% this year, valuing the St. Louis-based company at $46 billion.

“We think potential simplification of the Emerson portfolio at a reasonable valuation that supports evolution toward a higher underlying growth rate could be relatively well received by investors,” Citigroup Inc. analysts led by Andrew Kaplowitz said in a research note. “We do see potential for good value realization depending on what assets are included and where in the reported range a transaction is agreed upon (if a deal comes to fruition).”

The talks come following a pandemic boom in the US housing market, which saw home prices and home-improvement activity soar. The market has begun cooling in recent months amid rising interest rates and recession fears.

Emerson has been reshuffling its business mix through divestitures after merging its industrial software business earlier this year with Aspen Technology Inc. In August, it agreed to sell its garbage-disposal arm to Whirlpool Corp. for $3 billion.

The commercial and residential solutions division provides a range of products for making homes more comfortable and energy efficient, from thermostats and hot-water dispensers to heating, ventilation, and air-conditioning monitors, according to the company’s website.

It had $6.7 billion in sales in 2021, an increase of 18% from the year earlier, according to Emerson’s annual report.