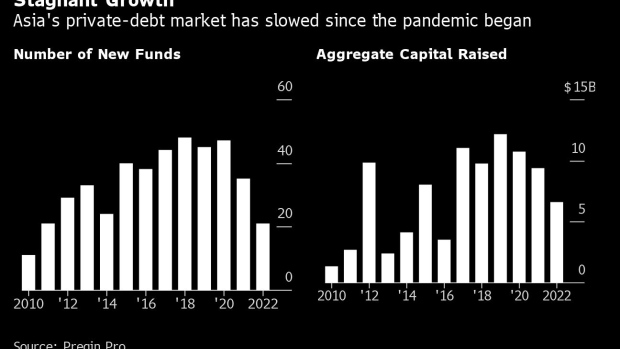 A visitor holding a Chinese national flag at the Bund in Shanghai, China, on Sunday, Oct. 2, 2022. The Chinese yuan advanced on last week in both onshore and offshore trading after a report that state-owned banks are preparing for intervention. Mainland markets are closed this week for a holiday. Photographer: Qilai Shen/Bloomberg , Bloomberg

Bucking an industry-wide slowdown, some of these alternative-asset powerhouses are building up their presence in the region at a brisk pace. Blackstone is targeting a tenfold increase in private credit assets to at least $5 billion “in the near term” while Apollo Global Management and KKR both recently launched their first Asia-oriented private credit funds worth $1.25 billion and $1.1 billion, respectively.

“There are a lot of growing sectors in Asia where we see increasing demand for financing, including tech, software and life science, especially at a time of market volatility and uncertainty,” said Roger Zhang, a managing director at Blackstone.

Private lenders globally have been shifting more toward prioritizing risk control, as they steer away from companies willing to accept higher borrowing costs but more vulnerable to an economic slowdown. This is also happening at a time when increased currency volatility is adding to the long-standing challenge in some Asian countries of curbs on foreign investment, factors that have threatened to temper the market’s momentum in the region.

“We are focused on giving capital to winners and businesses that are going to thrive but that are unable to access the capital markets for more technical reasons,” such as a lack of liquidity in public bond markets, said SJ Lim, a managing director at KKR.

KKR has made more than 15 credit investments totaling about $2.7 billion since 2019 in the Asia Pacific region, according to a KKR spokesperson.

Positioned between equity and cheaper public debt, private credit involves businesses getting money directly from a fund, which often offers more contractual flexibility than getting a loan from a bank or even borrowing from a shadow lender.

But bank lending remains the mainstay in Asia, given the institutional knowledge lenders have built up on the various regulations and legal standards across countries.

The number of new private-debt funds, as well the total amount of money they’ve all raised, has dropped since the pandemic began. That’s partly contributed to the average fund size rising to $346 million this year, up 18% from last year, according to data provider Preqin.

“There’s more appetite from investors to allocate to these funds as the latter have become more competitive in sectors where banks used to lend,” said Angela Lai, an analyst at Preqin. “Having a bigger fund would allow fund managers to lend in larger ticket size.”