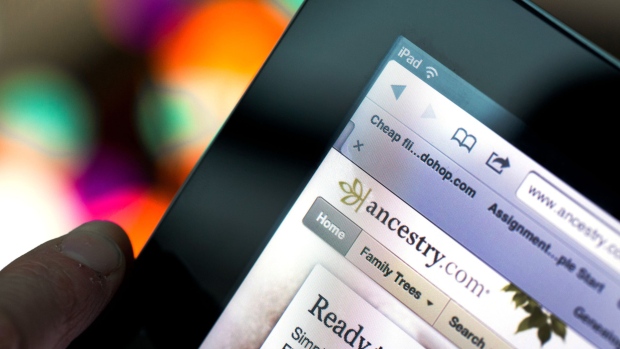 A page from the Ancestry.com Inc. website is displayed on an Apple Inc. iPad in this arranged photograph in London, U.K. , Jason Alden/Bloomberg

The deal is valued at US$4.7 billion, Blackstone said in a statement Wednesday. It’s the first acquisition by Blackstone’s largest ever private equity fund. Silver Lake and Singaporean sovereign-wealth fund GIC Pte have been the majority owners since 2016. After the deal closes, Blackstone will own about 75 per cent and GIC will still hold about 25 per cent of Ancestry.com, said people familiar with the matter, who asked not to be identified because the information is private.

New York-based Blackstone is flush with cash as investors continue to bet big on the firm amid the uncertainty caused by the COVID-19 pandemic. Executives have in recent months touted success in navigating the 2008 financial crisis to show that the business, which has US$156 billion in dry powder, will be well positioned to benefit from the current upheavals.

Many of the firm’s recent investments have been in growth companies and businesses likely to benefit from shifts in consumer behaviour. Last month, the group announced it was investing in Oatly AB -- a plant-based drink that’s been rapidly growing in popularity -- with partners including Oprah Winfrey. Blackstone also owns a majority stake in MagicLab, the owner of dating app Bumble.

Deal talks regarding Ancestry.com started a few months ago, when much of the world was still at home and looking for things to do, said the people with knowledge of discussions.

Based in Lehi, Utah, Ancestry.com has more than 3 million paying subscribers and more than 18 million people in its DNA network. It sells at-home DNA testing kits to customers, competing with 23andMe Inc.

Ancestry.com first went public in 2009, raising US$100 million. It was taken private in 2012 in a US$1.6 billion buyout led by private equity firm Permira, and on at least two occasions since has considered going public again, though it never got the valuation it was seeking.

Silver Lake and GIC acquired their majority stake four years ago in a deal that valued the company at US$2.6 billion. Prior owners, including management, Permira and Spectrum Equity, currently have a minority interest in the business.

Blackstone, the world’s largest alternative asset manager with US$564 billion in assets, is also focused on growing its life sciences group. It has spent more than US$1 billion this year investing in drugs that target high cholesterol, kidney disease in children and devices for diabetes patients.

Early in 2020, the firm bought US$11 billion of public equities and liquid debt as values sank and markets became more volatile. It also took stakes in companies including 21Vianet, a Chinese data center business, and a portfolio of Hollywood film studios.